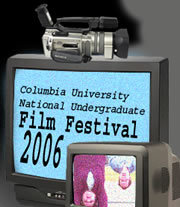 A national festival and film contest for college undergraduates and high school students, the CUNUFF was established in 2005 by two Columbia students to “give students a means to appreciate filmmaking created by their peers nationwide, hoping to inspire them with the art of creating independent film.” Films of all genres are accepted and a select number are chosen for screening at the festival, with judging in 10 categories by filmmaking industry professionals. * *

Originally published by Julie Hail Flory at newsinfo.nd.edu on April 19, 2006.