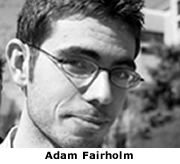 “CroissantWorld,” a student-drawn comic strip that originally appeared as a regular feature in the Observer, the daily student newspaper that serves the University of Notre Dame and Saint Mary’s College, is now available in book format.

Created and drawn by Adam Fairholm, a junior from Coral Springs, Fla., “CroissantWorld” offers a unique outlook on student life in the Notre Dame-Saint Mary’s community. It has appeared daily in The Observer since last fall when it was selected in a competition as one of two regular comics to be featured in the newspaper.

“The real thrill about doing even a small book is knowing that the comics I’ve drawn will still be around for a little while,” said Fairholm, who served as his own publisher. “When you spend two or three hours on a comic every day, it gets read and then the paper get recycled. But getting them all together in book form has been a lot of fun and a good way to know that whoever has liked the comics can get a copy of them in a bit more of a permanent form.”

The 103-page “CroissantWorld” book, which contains 155 cartoons (including 15 that have previously never been published), along with commentaries from Fairholm.

Originally published by Julie Hail Flory at newsinfo.nd.edu on May 11, 2006.