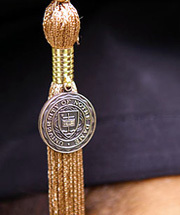 The University of Notre Dame’s 2008 graduating class is noteworthy for its accomplishments both as a whole, through a variety of numerical and statistical observations, and individually, through the stories of students with memorable tales to tell.

Some of the numbers are:

Beyond the numbers, here are a few individual student stories of distinction:

Adam Boocher , South Bend – As president of the math club, tutor and director of an undergraduate reading seminar in algebraic geometry, Boocher has shared his love of mathematics by mentoring numerous undergraduate students. He was the only first-year student ever invited into the Seminar for Undergraduate Mathematical Research at Notre Dame, a program for the most gifted junior and senior mathematics students. Beginning in his sophomore year, Boocher started taking graduate-level mathematics courses. His love of the challenge of Scrabble led him to co-found the Notre Dame Scrabble Club and as president, organize competitive tournaments – the latest of which benefited the Literacy Council of St. Joseph County. While at Notre Dame, Boocher conducted research through Research Experience for Undergraduates programs at Williams College, Claremont Colleges, and Notre Dame and presented at six undergraduate research seminars including an invited talk at Purdue University and a seminar he organized at Notre Dame titled “Undergraduate Work in Mathematics.” One of only 26 recipients in the nation in the field of mathematics to receive the National Science Foundation Graduate Research Fellowship, Boocher received the prestigious Barry M. Goldwater Scholarship in his sophomore year, when he also received the G.E. Prize for Honors Mathematics Majors and the Kolettis Award in Mathematics. This summer, he will guide high school mathematics teachers through the Research Experience for Teachers program. Boocher has chosen to pursue his doctorate in mathematics at the University of California, Berkeley, with a focus on algebra or number theory.

Bob Costa , Yardley, Pa. – One of the founding members of Notre Dame’s student-produced television network, NDtv, Costa is the host of “Office Hours with Bob Costa,” an interview-format program that he describes as “Meet the Press” meets “Charlie Rose.” Among his big “gets,” Costa has interviewed such big names as musicians DaveMatthews and Tim Reynolds, and Rev. John I. Jenkins, C.S.C., and Rev. Theodore M. Hesburgh, C.S.C., Notre Dame’s president and president emeritus, respectively. An American studies major and reporter for Notre Dame’s student newspaper, the Observer, Costa received Notre Dame’s 2008 James E.Murphy Award for Exceptional Journalism and this summer is heading to New York City to cover the 2008 presidential campaign and House and Senate races as the Wall Street Journal’s Robert L. Bartley Fellow. Next year he will begin a master’s degree program at the University of Cambridge in England, where he will study at Queens’ College, Cambridge, with a main research focus on the modern state and Anglo-American relations.

Adam Gadzinski , Ludington, Mich. – A senior physics-in-medicine major, Gadzinski completed his studies with a 4.0 GPA and was a candidate for valedictorian of his graduating class. For the past two summers, he received a fellowship to conduct clinical research at the Siteman Cancer Center at the School of Medicine at Washington University in St. Louis under Dr. David Gutmann and his research has been published in the journal Experimental Neurology. A four-year participant in the marching band, hockey band and the Notre Dame drumline, he also was a resident assistant and academic and multicultural commissioner on Hall Council for Morrissey Manor. In the community, he was a team leader for the National Youth Sports Program and volunteered through the Center for Social Concerns Appalachia Program. Gadzinski, who plans on specializing in pediatric oncology, was accepted to a number of medical schools, including Harvard’s, and has chosen to attend the University of Michigan Medical School as the dean’s scholarship recipient and specialize in either pediatric oncology or orthpaedic surgery.

Gadzinski can be reached at agadzins@nd.edu

Saderia Nicole Hooks , Miami, Fla. – An Africana studies major with a minor in theology, Hooks is the only student on campus with that unique academic combination and is the first person in her family and from her high school to attend Notre Dame. She serves as the program director for Lead ND, which works to curb educational inequity by facilitating a weekly after-school program for 7th and 8th grade “non-traditional” leaders in South Bend schools. She has worked for the last three years with a team of students hoping to establish a Black Student Association on campus, and, beginning in August, she will teach 4th grade in Jacksonville, Fla., at St. Pius V, a predominantly and traditionally black Catholic elementary school, as part of Notre Dame’s Alliance for Catholic Education program. Ultimately, Hooks says she wants to design curricula for students that teach them how to think, not simply memorize, and someday work in policymaking for the U.S. Department of Education.