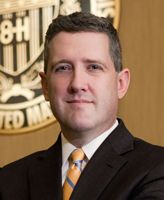 James Bullard, president and chief executive officer of the Federal Reserve Bank of St. Louis and a prominent contributor to U.S. monetary policy, will share his perspective on the state of the economy in a September 20 speech at the University of Notre Dame’s Washington Hall.

Titled “U.S. Monetary Policy: Still Appropriate,” Bullard’s talk is the inaugural event in a speaker series designed to show students how economics can be applied to a broad range of fields, according to Richard Jensen, the Gilbert F. Schaefer Professor of Economics and Chair of Notre Dame’s Department of Economics.

The new Theodore and Rita Combs Distinguished Lecture Series is supported by a donation from Notre Dame alumna Ann Combs, who graduated in 1978 with a BA in economics and government and is now a principal at the Vanguard Group, leading its government relations activities.

“The hope,” she says, “is that by bringing distinguished individuals from business and academia to campus to speak, we can expose both graduate and undergraduate students, the faculty, and the public to new research, current policy debates, and new ways in which economics is being applied to solve problems. I also hope it may inspire students to think about the many different career paths available to them.”

Bullard’s speech, which starts at 6:30 p.m. and is open to the public, is expected to focus on current monetary policy, including where the Federal Open Market Committee stands on interest rates and why it recently decided to leave them unchanged, Jensen says.

Future speakers will be drawn from across the public sector and business world.

“We want to bring in economists who aren’t just academics,” Jensen says. “It’s important to help students see what it is that economists actually do in practice and to better understand what careers are possible. We want to show them all the options that are available.”

Combs, who previously led the government agency responsible for regulating private-sector employee benefits, says her exposure to economics as an undergraduate in the College of Arts and Letters “helped me enormously to understand the economic and market forces that influence these vital programs.

“I believe a strong economics department is essential for a liberal arts program,” Combs adds. “It is doubly important during these tough times when so many students and their parents are worried about finding a job after graduation. An economics degree is very marketable while allowing a student to be within the College of Arts and Letters, gaining exposure to so many interesting and challenging ideas.”

The new lecture series, she says, can play an important role in the goals of the College’s growing department, which has tripled the number of economics majors in the last decade and in the last year has launched an international economics major and a business economics minor. Over the last decade, the department has also hired 22 new faculty members, including most recently William J. and Dorothy K. O’Neill Professor of Economics Timothy Fuerst, one of the most-cited economists in the world.

“So much progress is underway,” Combs says. “The new faculty and the new interdisciplinary programs are really inspiring. I hope the lecture series will contribute to the terrific momentum underway—and am very excited that Jim Bullard will be the inaugural speaker.”