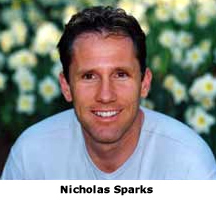 Among notable Notre Dame alumni, best-selling author Nicholas Sparks often tops the list in the literary category. With novels such as “Message in a Bottle,” “A Walk to Remember” and “The Notebook” made into major motion pictures, he is something of a household name.

Sparks is the benefactor for what is fast becoming a legacy of significant authors to emerge from the Creative Writing Program.

It has been nearly five years since Sparks, who graduated in 1988 with a finance degree, established a $1.5-million initiative to support aspiring writers. The Sparks initiative underwrites a three-tiered program that includes a fellowship, internship opportunities and the annual Sparks Prize. The prize awards $20,000 to a new graduate of the two-year master’s program, who then can stay at Notre Dame for a year to focus on completing a book.

Since its inception in 2001, the Sparks initiative has become a key component of the Creative Writing Program, whose young authors are experiencing “more success in early publishing than ever expected,” according to William O’Rourke, director of the program.

“Three students from the past five years are going to be published by major houses,” O’Rourke says. “That level of success matches us with any program in the country.”

The 2005 Sparks Prize winner, Angela Hur, achieved what O’Rourke describes as the Sparks “trifecta.” The fellowship placed her as an editorial intern on Notre Dame Review, the University’s award-winning national literary journal. As a Sparks intern, Hur completed a stint at a New York publishing house. Using the Sparks Prize Hur completed her novel, “The Queens of K-Town.” O’Rourke predicts it will soon have a publisher.

Past Sparks Prize winners who have published works include 2004 winner Kelly Kerney, the first to ink a deal with a major house. Her novel, “Born Again,” is forthcoming by Harcourt. It is described as a comedy of a girl who secretly reads Darwin and becomes caught between her faith and her intellect in a family of evangelicals, charismatics, and speakers-in-tongues.

Sara Swanson won the prize in 2003 and has since had short stories published in Tampa Review and Connecticut Review.

The poetry of Jenny Bryant, the 2002 winner, has appeared in numerous publications.

O’Rourke gives credit where credit is due, acknowledging that the Sparks Prize is indeed a major attraction for high-quality students and a huge asset to the program. However, he also is quick to point out that the initiative is just one of several high-profile keys to the program’s success, joining the Notre Dame Review and the prestigious Sandeen Prize in Poetry and Sullivan Prize in Short Fiction. The University annually awards the latter prizes in conjunction with Notre Dame Press; they allow the recipient to complete a book.

The number of applicants to the Creative Writing Program has doubled in the past six years, from 100 to 200 hopefuls (the program only admits 10 per year), and O’Rourke says the quality of candidates also has been especially strong during that time.

“The Sparks initiative came at a good time. It’s served as a `booster rocket’ for the program,” he says.

Originally published by Julie Hail Flory at newsinfo.nd.edu on April 04, 2006.