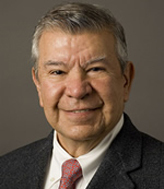 Jorge Bustamante, Eugene Conley Professor of Sociology at the University of Notre Dame, has received the Mexican Bar Association’s National Jurisprudence Award in honor of his lifelong work in defense of the human rights of migrants.

According to the Mexican Bar Association, the prize conferred on Bustamante at a December 2, 2010, ceremony is the organization’s most significant and prestigious honor.

Bustamante, who holds a law degree from Universidad Nacional Autónoma de México and a Ph.D. in sociology from Notre Dame, says his advocacy work is motivated by his academic research.

“My research has shown me the extent to which migrants are vulnerable as subjects of human rights … and that is something that I simply cannot tolerate,” he says. “It motivates me to do something, which is to raise consciousness about injustices and negative consequences for human beings of producing such a vulnerability. And that is something that I try to measure and I observe all over the world under my mandate as U.N. special rapporteur on the human rights of migrants.”

Bustamante, who was appointed to the U.N. role in 2005, says his advocacy efforts also include publishing more than 200 scholarly journal articles, writing columns for newspapers in Mexico and the United States, and teaching undergraduate and graduate courses on international immigration and human rights.

Before joining Notre Dame’s faculty in 1986, he founded El Colegio de la Frontera Norte, a prominent Mexican research institution devoted to the study of social issues affecting the border region between Mexico and the United States.

In 1998, Bustamante won the Premio Nacional de Ciencias—the highest award granted to scientists by the Mexican government, and in 2006, Mexico’s Congress nominated him for the Nobel Peace Prize for his advocacy of human and labor rights for immigrants. He is also the recipient of the 2007 Cox-Johnson-Frazier Award, one of the highest honors granted by the American Sociological Association.

Bustamante says he feels fortunate to have been selected from among nearly 20 nominees for the Mexican Bar Association’s National Jurisprudence Award this year.