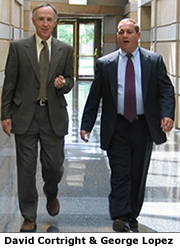 The symposium will include new U.N. Secretary-General Ban Ki-moon and about 120 council ministers and personnel. Peter Wallensteen, the Richard G. Starmann Research Professor of Peace Studies at the Kroc Institute, also will participate in the daylong meeting at U.N. headquarters in New York.

Lopez and Cortright have worked with the U.N. Security Council, government leaders and international agencies for more than a decade to reform and refine the implementation of economic sanctions. The co-authors of five books on sanctions, they helped develop the use of “smart sanctions” – penalties that focus tightly on the leaders responsible for offensive policies but that avoid harming innocent people.

“What the world learned after sanctions were imposed against Haiti, Yugoslavia and Iraq is that comprehensive sanctions are a sledgehammer on a country’s economy and people,” Lopez said. “On the other hand, the use of targeted sanctions against Slobodan Milosevic in Yugoslavia, Muamar Qaddafi in Libya and Kim Jong Il in North Korea shows that this approach has substantial payoffs. This is norm enforcement with teeth.”

Since 1990, the U.N. Security Council has imposed coercive economic measuresagainst many nations, non-government entities, militias and other political and military movements. It currently is debating whether to impose additional sanctions against Iran for uranium enrichment and against Sudan for actions in Darfur.

The symposium is funded by Greece, an outgoing member of the U.N. Security Council. It will begin with a keynote address by Ban, followed by a full day of panels and workshops led by Lopez, Cortright, Wallensteen and former diplomats and technical experts involved in most of the sanctions successes of the past decade.

Notre Dame’s Kroc Institute is dedicated to understanding the causes of violent conflict and promoting the conditions for sustainable peace. Lopez is a senior fellow at the institute and Cortright is president of the Fourth Freedom Forum and a Kroc research fellow. They are co-directors of the institute’s Sanctions and Security Project.

More information on the Kroc Institute is available at http://kroc.nd.edu/

Originally published by Joan Fallon at newsinfo.nd.edu on April 26, 2007.