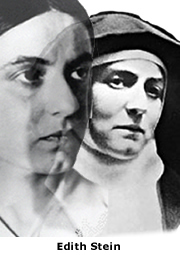 Whether or not it be a sign of the movement’s intellectual vitality, contemporary culture seems to contain as many versions of feminism as it does feminists, if not females. This phenomenon has been conspicuous at Notre Dame recently during a fervent campus-wide discussion initiated by the University’s president, Rev. John I. Jenkins, C.S.C., of issues arising from local performances of the controversial play, “Vagina Monologues.”

It also was much in evidence during “The Edith Stein Project: Redefining Feminism,” a weekend conference held on campus Feb. 10-11 and attracting some 300 people from around the country.

The conference, organized by three Notre Dame undergraduate students, attempted to promote what the late Pope John Paul II called a “new feminism.” In his 1995 encyclical, “The Gospel of Life,” Pope John Paul urged his readers to reject “the temptation of imitating models of `male domination’, in order to acknowledge and affirm the true genius of women in every aspect of the life of society, and overcome all discrimination, violence and exploitation.”

Through the unique capacity of motherhood, John Paul said, “women first learn and then teach others that human relations are authentic if they are open to accepting the other person: a person who is recognized and loved because of the dignity which comes from being a person and not from…usefulness, strength, intelligence, beauty or health.”

The organizer’s choice of an academic nun and martyr as the model for their project could seem anomalous. Born in the late 19th century to a Jewish family in Breslau, Germany, Edith Stein studied philology and philosophy in the great universities of her country, and was a friend and colleague of Edmund Husserl, the founder ofphenomenology. She converted to Catholicism when she was 30 years old, became a Carmelite sister, was arrested by the Nazis and died at Auschwitz on Aug. 9, 1942. Sister Teresa Benedicta of the Cross (the name Stein was given by her Carmelite community) was canonized, or proclaimed a saint, by Pope John Paul in 1998.

But Edith Stein also was a pioneer of the woman’s movement in Germany and had, long before the atrocities of death camp and gas chamber, endured the injustice and indignity of sexism in European academic and intellectual communities. She was simultaneously relentless and humble in her pursuit of truth, as Evelyn Waugh wrote in a 1952 eulogy: “Her spirit shines out, very clear and lonely; a brilliant intelligence; a pure, disciplined will; a single motive power, the Grace of God. Edith’s death is perhaps an irrelevant horror….She did not sit, waiting on God. She went out alone and by the God-given light of her intelligence and strength of purpose, she found Him.”

For conference organizer Anamara Scaperlanda-Ruiz, a junior from Norman, Okla., Edith Stein exemplifies an enhanced feminism which is distinguishable from the orthodoxies of “the feminist elite.” Scaperlanda used the arresting example of the film “Mulan” to illustrate her point.

“At the onset of the movie,” she said, “Mulan tries to be the stereo-typical Chinese girl, something that she is not. This is what the feminism of the `60s and `70s was rebelling against. Then Mulan joins the Chinese Army instead of her father, acting and pretending to be a man. This is what many women, following the feminism of the `60s and `70s, did. Mulan ultimately saves China, but it is only when she uses her feminine gifts _and_her unique gifts as a person that she succeeds.”

If appeals to the “feminine gifts” and to the “complementarity” of men and women distinguish the “new feminism” from the more familiar forms, the challenges it confronts apparently do not: The 21 speakers for the Edith Stein Project—students, professional women, university professors and others—addressed such issues as rape, domestic violence, abortion, eating disorders, the plight of female migrant workers and the effects of pornography.

In addition to wide public attention, the conference drew high praise from one of its participants, Bishop John D’Arcy of Fort Wayne/South Bend, who compared the witness of Scaperlanda and her fellow organizers, seniors Caitlin Shaughnessy and Madeleine Ryland, as “seekers of truth” to that of Saint Edith Stein herself.

David Solomon, director of Notre Dame’s Center for Ethics and Culture, which sponsored the conference, said that the event marked a crucial turning point in the effort to define the work of a Catholic university.

Evidently, that work will continue, as plans are underway for another conference next year.

Originally published by Michael O. Garvey at newsinfo.nd.edu on February 22, 2006.