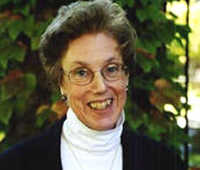 Professor Frank O’Malley, one of the most affectionately celebrated “bachelor dons” of Notre Dame history, famously said of the University’s older buildings that “there’s blood in the bricks.” He was speaking of the years of work, worry and loving witness that have made the place what it is. He was speaking, perhaps unwittingly, of himself. He could as easily have been speaking of Sister Mary Louise Gude, C.S.C.

“I’m one of the last Holy Cross sisters at Notre Dame,” said Sister Gude, who is addressed and referred to by all who know her simply as “ML.” She is retiring after a quarter of a century of multifaceted professional service to the University, in its residence halls, its classrooms, its administrative offices, and any of several places on and off-campus to which her vocation has drawn her.

“Retiring,” in this instance, is merely a technical designation of professional status. People like ML are incapable of inactivity.

A member of the faculty of Notre Dame’s Romance languages and literatures department, ML has an enviable reputation as a scholar of 17th century French fiction and 20th century French intellectual history. Her publications include two books, “Le Page Disgraci: The Text as Confession” and “Louis Massignon: The Crucible of Compassion.”

In 1983, while chairing the modern languages department at Saint Mary’s College, she moved across the road to Notre Dame to become assistant rector at Notre Dame’s Breen-Phillips Hall. She successfully managed these two demanding careers until 1987, when she became rector of Farley Hall, serving in that post until 1993. She stayed on the Notre Dame campus teaching French, and became assistant vice presidentfor student affairs in 1998.

“I think it’s the work with our gay and lesbian students that I’m most satisfied with,” she said, “and let me tell you, it’s not the easiest work in the world. On the one hand, we’re committed to affirm Church teachings on sexuality, and on the other hand, our commitment obliges us to do all we can to respond to their needs and to make Notre Dame a welcoming place.”

Two Notre Dame presidents, Rev. Edward A. Malloy, C.S.C., and Rev. John I. Jenkins, C.S.C., have praised the committee’s efforts over the years, and student affairs vice president, Rev. Mark Poorman, C.S.C., recently described it as indispensable to the University.

Sister ML’s pride is amply justified. Tirelessly at work in a ministry which all but guaranteed the fury of passionately held, deeply opposed, and vehemently expressed convictions, she endured the recriminations of angry activists while establishing a secure and charitable institutional environment in which gay and lesbian students would be heard, respected, and, most importantly, loved.

“Basically, my method was hanging in there. I just refused to go away,” she said.

Even now, she won’t be going too far away.

“I’m looking forward to this translating gig,” she said, referring to her participation in an international conference of Holy Cross sisters last month in France. “Later on, I’ll probably find something to do around Saint Mary’s and Notre Dame.”

No one who knows Sister ML is surprised by those plans, but they are good news all the same.

Originally published by Michael O. Garvey at newsinfo.nd.edu on August 10, 2006.