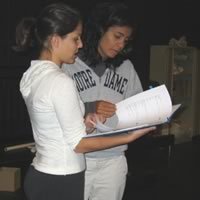 You step into the final week of rehearsals for the Department of Film, Television, and Theater’s (FTT) new play. The actors warm up for their scenes, and the production crew prepares the stage. Suddenly a young woman in a Notre Dame sweatshirt and jeans commands the students’ attention and begins the final scene of the play.

The woman is Siiri Scott, associate professional specialist in FTT and director of Big Love. In addition to teaching and directing for the Notre Dame mainstage season, Scott also works professionally in television, film, and regional theatre. Known as “Siiri” to her students, Scott challenges the typical classroom structure with her straightforward direction and informal approach to instruction.

“Creating theatre is a collaborative experience,” says Scott. “We must bring the best and worst of ourselves to the table. I want the students to feel as much ownership as possible. I’m confident that they know who is actually in charge.”

Her familiarity with her students paid off in the production of Big Love, a contemporary adaptation of the Greek play, The Suppliant Woman by Aeschylus, that challenges contemporary gender politics. The play was performed in November, 2006 in the Philbin Studio Theatre of the DeBartolo Performing Arts Center.

“I wanted to get a large number of students involved,” says Scott. Big Love has great roles for both men and women, allowed me to cast five freshmen, and fulfilled my desire to do a physical theatre piece.”

Working on the play offered its student cast the dual opportunity to sharpen their acting abilities and participate in an innovative performance with Professor Scott.

“I really liked the script,” says Conor Woods, a senior FTT major who played Guliano. “While she doesn’t have a hickory stick, Siiri’s command certainly has a snap to it. And it doesn’t tickle.”

“After reading the play, I was lost as to the setting of the play,” says freshman FTT major Stephanie Elise Newsome who plays Eleanor. “Siiri created this world in my mind of fashionable, rich, Italian aristocrats who meet these beautiful young women. Siiri has time to do individual work with each of the characters to make everything just as it should be.”

Scott’s guidance for her actors is not limited to her direction in Big Love. Her students also look to her for professional advice and friendship.

“Siiri has made me a part of the FTT family,” says Tashi Thomas, a junior who played Olympia. “She seems to get to know the whole person. This not only encompasses knowing their academic achievements and capabilities but also their insecurities, goals, and quirks as well.”

“Siiri becomes more like a coach than a professor,” says Sarah Loveland, a senior FTT major who played Lydia in Big Love. "Beyond academic and professional advice, you can’t deal with drama without dealing with the realities of life, and she’s always been there to help with that, too.”

Scott’s professional and personal guidance has meant that students feel comfortable working with her both on the stage and in her office. Learning from her not only led to their passionate performances in Big Love but also to their desire to incorporate theater into the rest of their lives.

“I hope to incorporate acting into some aspect of my adult life,” says Thomas. “That might mean running acting workshops with sick or disabled children in a hospital setting. I would definitely consider teaching like Siiri has done.”

“Siiri gives guidance in order for her students to discover their own way to solve problems,” says Newsome. “She challenges her students by forcing them to ask questions, and discover the answers.”

“Acting forces us to face our truest selves, and my comfort level with Siiri is high enough to allow me to do so,” says Loveland. “Siiri really knows us, she gets us, and this makes for a very powerful and effective relationship.”

This piece was contributed by Jane Marie Russell (’07), an intern in the College of Arts and Letters Office of Web Communications and Support.