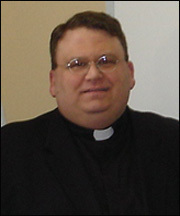 Oregenes Adamantius, to whom the academy has given the nickname “Origen,” was a second and third century Alexandrian monk and genius who became one of the most influential theologians and biblical scholars of the early Church. He was described by Saint Gregory of Nazianzus, one of his students, as “the stone that sharpens us all.”

Origen has undeniably sharpened Rev. Michael Heintz, rector and pastor of Saint Matthew’s Cathedral in South Bend, who will receive a doctoral degree in theology from Notre Dame at the May 18 Commencement ceremonies.

Father Heintz, already quite sharp in the knowledge of Latin and Greek, has completed and defended his dissertation on “The Pedagogy of the Soul: Origen’s Homilies on the Psalms” under the co-direction of Rev. Brian Daley, S.J., Catherine F. Huisking Professor of Theology, and John Cavadini, chair of the theology department at Notre Dame. His project required him to translate these homilies into English for the first time, and the resulting collection is soon to be published by Catholic University of America Press in its “Fathers of the Church series.”

By any measure, such scholarship would be an impressive accomplishment, but Father Heintz also has the unique distinction of having pursued and earned his theological doctorate on a part-time basis. No one has ever done that before.

“It is truly astonishing to realize that such high quality work—a dissertation which is already contracted to be published—was accomplished without Father Heintz missing a pastoral beat in his ‘day job’ as rector of a diocesan cathedral,” Cavadini said. “Even the stream of postcards he is accustomed to write, congratulating the youth of his parish on this sports accomplishment or that academic achievement, and so warmly appreciated by their recipients, never stopped!”

Nor did the other and more demanding routines of Father Heintz’s parish priestly life—the confessions, the counseling, the visits to the sick, the deathbed vigils, the baptisms, the Masses, the preaching, the prayer and the popular spiritual reading groups he has organized.

Not that Father Heintz, a congenially talkative man, seems terribly proud of all this.

“I’m just so grateful that they were willing to take a chance on me,” Father Heintz said recently. “I couldn’t have been more blessed. Everybody in the theology department and on my committee has been so supportive, and so has my bishop.”

He shrugs, even squirms a bit, when acclaimed for his conspicuous academic and pastoral successes, and seems genuinely to regard them as unremarkable. When asked how he intends to celebrate the reception of his degree he seems not to have thought very much about it, and shudders at the notion that his parishioners might want to honor him.

“I suppose I’ll have dinner with a few friends,” he says vaguely.

Father Heintz insists that his intellectual and spiritual work are mutually invigorating and replenishing.

“I know that my work as a priest is strengthened and enriched by my work in historical theology,” he says, “and I think I’m a better theologian because of my pastoral work as a priest.”

He pauses and smiles, contentment, but not a trace of fatigue, in his expression and posture. “I just love it here,” he says quietly. Asked if by “here” he means the University of Notre Dame or Saint Matthew’s Cathedral in South Bend, he just laughs.

“Both, obviously,” he says.

Originally published by Michael O. Garvey at newsinfo.nd.edu on May 14, 2008.