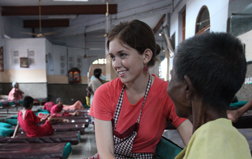 Courtney Henderson, a senior majoring in Chinese and the Program of Liberal Studies, has been named the winner of the 2010 Liu Family Distinguished Achievement Award in Asian Studies. The Department of East Asian Languages and Cultures bestows the award each year to the student whose character and undergraduate work best exemplifies the qualities of commitment, diligence, and imagination in the study of Asia.

“Courtney represents the best among our students in the rigor of her intellectual pursuit and the breadth of her cultural horizon,” Xiaoshan Yang, associate professor of East Asian languages and cultures and chair of the selection committee, says. “We had a very strong pool of candidates this year, but the committee’s vote was unanimous.”

Henderson did not begin to learn Chinese until her sophomore year. “I wanted to take on a new and different challenge to satisfy my college language requirement—and by the time I finished my required courses, I had fallen in love with Chinese, with its beautiful sounds and the cultural richness that permeates the language.”

After only two semesters of study, Henderson took her first prize in the annual Chinese Speech Contest, an accomplishment that she has repeated in both her junior and senior years.

“The first year, our skit about a visit to the beauty salon was pretty simple, because we didn’t have much vocabulary,” she says. “In this year’s skit, we used about 20 ‘four character’ Chinese idioms—those are really difficult to learn.”

In the summer after her sophomore year, Henderson participated in Notre Dame’s intensive Chinese language program, offered through Fu Jen Catholic University in Taipei, Taiwan. This program is designed to take students through an entire year of study in just eight weeks.

Henderson says that although she had practiced diligently with Notre Dame friends who were native Chinese speakers, her first tries at communication in Taiwan were not a huge success. “I was so excited to be able to get authentic Chinese ‘bubble tea,’ my favorite drink. I tried to order it over and over again, but no one could understand me.”

Despite difficulties along the way, Henderson’s hard work paid off this semester when she was tested in the Oral Proficiency Interview administered by the American Council of Teachers of Foreign Languages. She was rated an advanced speaker, achieving the eighth level on a 10-level scale.

“It was a 30-minute Skype conversation,” Henderson explains. “We started out with a simple question about the meaning of my name, but we ended up talking about the differences between India and the United States, China’s ‘one child’ policy, and U.S. environmental regulations. It was a real challenge.”

After graduation, Henderson will teach English in Shenzhen, a city outside of Hong Kong, to experience firsthand life in mainland China. She hopes to begin a graduate program in Asian studies upon her return to the United States.

“Bringing the best of Western culture from my liberal studies major together with the understanding of Eastern culture I gained from learning Chinese gives me a unique perspective on the world,” Henderson says. “That, together with my [International Service Learning Program] experience in India at an orphanage for children with disabilities and at Mother Teresa’s home for they dying, taught me something very important: Humanity crosses borders.”