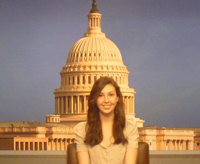 Notre Dame senior FTT and political science major Patricia Harte on the set of Face the Nation, one of her multiple broadcast journalism internships.

Currently a production assistant at WNDU, Harte interned at Face the Nation with Bob Schieffer during her spring 2012 semester in Notre Dame’s Washington, D.C. program and worked through the summer as an intern for Cox Media Group, where she covered events at the White House, on Capitol Hill, and even at the U.S. Supreme Court.

“I was in the Supreme Court when they announced the health care decision [on the constitutionality of the Patient Protection and Affordable Care Act],” she says. “I got to experience that in the press section, which was pretty sweet.” 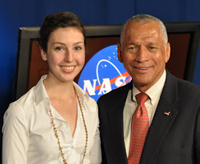 Charles Bolden, the current head of NASA, was among the many experts senior Patricia Harte interviewed as a journalism intern in Washington, D.C.

Harte says her College of Arts and Letters coursework has prepared her for the challenges of broadcast journalism—from research, analysis, writing, and public speaking to understanding politics and learning vital elements of television production.

“It really gave me what I needed to use as a launching pad for real work,” she says.

And work she did. At Face the Nation, Harte researched every guest, pouring over transcripts from past speeches and interviews to compile a research binder for host Bob Schieffer.

“I got to meet a lot of interesting politicians,” Harte says, “and it was excellent exposure to the whole behind-the-scenes world of TV politics. You see politicians go on the weekly shows all the time—and to be a part of that was really fun.”

In her role at Cox, Harte was also frequently asked to interview prominent politicians. “It was really exciting for me. I would get a phone call saying ‘Tricia, go to the Senate Rotunda, you have to do an interview at 12:15,’ and it would be with U.S. Senator Marco Rubio.” 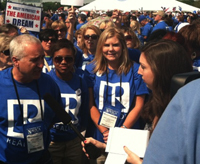 Patricia Harte, far right, interviews realtors at the “Rally for the American Dream” in front of the Washington Monument.

These kinds of experiences have given her a competitive edge in the job market, says Harte, as has the advice she got from FTT advisers Karen Heisler, adjunct assistant professional specialist, and Gary Sieber, adjunct instructor.

“They have been really helpful in terms of career prep for me,” she says. “I talk to Karen all the time—I had her for Broadcasting and Cable, and Sports and Television. She’s been my go-to for internships and jobs.”

Heisler, whose serves as the department’s internship coordinator, says internships are essential for majors in Film, Television, and Theatre. “Students gain invaluable insight into how these industries work, and learn about jobs and careers they probably never knew existed,” she says. “Internships help broaden students’ horizons and often expand their networking connections.

“In the film, television, and theatre businesses,” she adds, “employers often don’t ask for your transcripts—they want to know what you’ve done.”

In addition to helping students find and apply for internships, Notre Dame’s Career Center and the College of Arts and Letters can help connect students with financial support. Harte, for example, received a grant from the Arts and Letters Summer Internship program, which helps defray living expenses.

The Career Center also put Harte in touch with Rock Center with Brian Williams producer and Notre Dame alumnus Tom Bettag during her time in Washington, D.C. “I would meet with him once every three weeks . . . He would email me and say, ‘I’m delayed in Iran; can we move my meeting to 5 p.m.?’” she says. “He was awesome.”

As her final semester begins, Harte is in the midst of compiling her resume and applying to positions across the nation.

She wants to work as a broadcast journalist, covering politics, but says that no matter where she ends up, she knows that she can rely on the University’s robust alumni network.

“Notre Dame has teachers who can guide you along the way and, with all these alumni who have gone into television, there are a lot of connections that can help you with your career.”