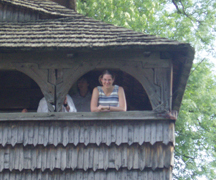 South Bend native and University of Notre Dame senior Greer Hannan spent last year in the University’s Dublin program. With side trips, including one to Le Mans, France, Hannan thought she had seen Europe.

That was until late June, when she arrived by train at the base of the Carpathian Mountains in the western Ukrainian countryside. Her mission was to teach English to college students of Ukrainian Catholic University (UCU), one of four Eastern European Catholic university partners of Notre Dame’s Nanovic Institute for European Studies.

Supported by the institute, Hannan and three other Notre Dame students joined 16 U.S. and Canadian volunteers and 100 UCU students for an intense three-week program. Their isolation near the mountains was part of an experience that included semi-occasional hot running water, primitive bathroom facilities and a daily lunch of borscht. It all made Hannan realize she had found another Europe, one that is a place of contrasts.

“The weirdest thing was seeing a well for water in a front yard, an outhouse in the backyard, and someone standing in the yard talking on a cell phone,” she said.

Most Ukraine students have access to television, videos and the Internet, and Hannan was sometimes surprised by their influence. Some UCU students open Facebook accounts as a way of keeping in touch with their American teachers. Some seemed familiar with the Irish step-dancing show “Riverdance.”

But crops were transported by horse-drawn carts, and when Hannan stopped to capture the quaint image in a photograph, a UCU student expressed the surprise question, “Haven’t you ever seen one?” Her students were puzzled by stories of how the Amish community in north central Indiana eschews modern conveniences.

“To them, it was so strange to have access to modern advantages and not use them,” Hannan said.

Many of the volunteer college students, including two who had just finished their first year at Notre Dame, signed up for the experience to augment their studies in Russian. Faith and an interest in Catholic education drew Hannan, a theology and philosophy major.

UCU has reconstituted its Catholic mission since 1994, when the Soviet regime pulled out. But Catholic university students face a social stigma.

“They constantly have to defend their choice,” she says.

The students’ faith was genuine, as was their interest in speaking—albeit in rudimentary English—about their beliefs, Hannan says. Five hours of daily classroom work balanced three hours of liturgical services—all of them sung. Nightly, Hannan and another volunteer led students in the Rosary.

Hannan will use some of her senior year to prepare her honors thesis on the philosophy of Catholic education. Her time in Ukraine will help frame her thoughts, not just on how these institutions are structured, but on the dedication and commitment they elicit.

The newness of the University, the passionate thoughtfulness of its chief administrator and the enthusiasm of the students, have given her a new view of Notre Dame, as well.

“It almost made me think what it was like to be at Notre Dame in its beginning,” she said.

Originally published by Gail Hinchion Mancini at newsinfo.nd.edu on September 08, 2008.