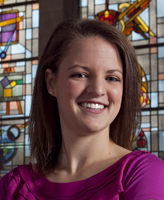 After years of neglect and collecting dust, Native American artifacts at the Morristown National Historical Park have finally been rediscovered because of the work of Carleigh Moore, a senior anthropology major at the University of Notre Dame.

Funded by an Undergraduate Research Opportunity Program grant from Notre Dame’s Institute for Scholarship in the Liberal Arts, Moore traveled to New Jersey in summer 2011 to help the park comply with the federal Native American Graves Protection and Repatriation Act (NAGPRA). The law requires museums and federal agencies to return Native American cultural items to lineal descendants or affiliated tribes.

“The collection had been mishandled for many decades,” Moore says. “The artifacts were not catalogued or stored properly, and some artifacts were stolen and damaged while on loan at other facilities. I analyzed the documentation the park had, used my judgment and research materials to identify the artifacts, and created a new catalogue system for the collection.”

Moore, who is also a supplementary major in peace studies, says her coursework in the College of Arts and Letters was the perfect preparation for taking on this task.

“The park was being pressured to report on NAGPRA compliance,” she explains, “but no one in the office was even familiar with the legislation. I had just finished an archaeology class in which we learned about NAGPRA and tensions between Native American communities and the institutions that held their cultural materials and human remains. I knew this would be an excellent opportunity to take a leadership role in a research project.”

Throughout the summer, Moore pored over numerous artifacts, identified them, and catalogued and photographed the entire collection, which, she says, will provide access to those who are unable to travel to the museum.

“I quickly realized that the cataloguing and photographing project would be most beneficial to all parties involved,” Moore says. “The park would be able to provide documentation about the collection for NAGPRA compliance concerns, future researchers could easily expand on the project, and most importantly, Native American representatives could see the collection through photographs.”

Moore’s work at Morristown National Historical Park didn’t stop with the completion of her summer research assistantship. The park has since decided to put together a Native American exhibit based on her research.

Moore says she will continue consulting with park representatives as that project develops, drawing on what she learned over the summer and in a fall 2011 course at Notre Dame called Collecting Indians: Museums and Native American Institutions. In fact, she says, her final project for that class was a report detailing her suggestions for how the park should curate the exhibit.

Moore, who is pursuing a career as a museum curator or preparator, says the UROP grant allowed her “to gain invaluable experience managing an archival research project from start to finish.

“Modern museums must deal with complex legal requirements to make sure their collections are in compliance with laws regarding culturally significant objects. It is beneficial to learn about this in the classroom, but hands-on experience in the field is essential preparation for employment in the museum industry.”