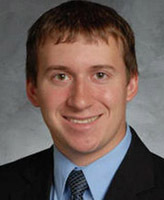 For the third time in the past four years, a student enrolled in the John W. Gallivan Program in Journalism, Ethics and Democracy at the University of Notre Dame is the recipient of the Brook Baker Collegiate Journalist of the Year Award.

Andrew Owens, a graduating senior in the Gallivan Program, was named the 2013 Baker Award winner at a recent ceremony of the Indiana Collegiate Press Association on the Indiana University Bloomington campus.

Owens joins Sarah Mervosh, a 2012 Notre Dame graduate and 2010 alumna Jenn Metz as Gallivan Program students who won the honor of being named Collegiate Journalist of the Year in statewide competition involving both public and private universities and colleges throughout Indiana.

In the past year, Owens was also the recipient of the Harry Ornest Memorial Award in Sports Journalism, which supported his summer internship during 2012 at The Los Angeles Times and provided a scholarship for his senior year at Notre Dame.

Mervosh is currently a reporter at The Dallas Morning News, and Metz is an associate producer at ABC World News with Diane Sawyer.

The Gallivan Program offers a minor in journalism for undergraduates pursuing any major at Notre Dame, and it also conducts activities (such as the Red Smith Lecture Series) to advance the understanding of contemporary journalism for the public at large.