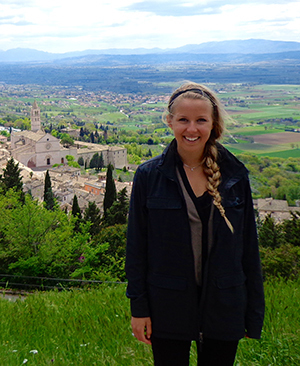 An internship at the Vatican. A year abroad at the University of Oxford. A senior thesis on extremist recruiting in the U.S. and the Islamic state.

Senior political science and economics major Alex Genord said that each of these academic feats has been made possible by her participation in the University of Notre Dame’s Glynn Family Honors Program.

“Glynn has been an awesome experience,” Genord said. “I was so lucky that starting from my first semester here, I was in small classes with fantastic professors who got to know us and really cared about making sure that we made the most of our time at Notre Dame.

“The Glynn program has given me funding to go to Rome. The professors in the program have written letters of recommendation for me. It was even two Glynn professors who encouraged me to apply for the Oxford program. Now, I’m wrapping it up with my honors thesis and the Glynn classes that we’ve taken this year. It’s come full circle, and I’ve really enjoyed the experience.”

She said funding from the Glynn program made it possible for her to accept the unpaid internship. “Airfare and living in Rome are expensive,” Genord said. “Glynn’s support made it work.”

During her sophomore year, Genord set her sights on Notre Dame’s one-year study abroad program at the University of Oxford. She said professors from the Glynn program not only encouraged her to apply to but also helped her cultivate the skills she needed to succeed there.

“Going to Oxford, I was a little nervous about how I was going to stack up,” Genord said, noting that classes there follow a different model than at typical American universities.

Each week, students work through a reading list, write essays, and then meet with professors one-on-one or in groups of two to three students to discuss their papers and defend their positions.

“I think the small classes I had in the Glynn program really challenged me to learn to express my opinions and defend them,” Genord said. “They also helped me develop presentation and writing skills that prepared me well for the work I was doing at Oxford.”

Genord then spent the summer after her junior year interning in Brussels, Belgium at the U.S.-European Media Hub of the U.S. Department of State’s Bureau of Public Affairs.

While working at the State Department, she followed the coverage of ISIS’ advance across Iraq and was inspired to focus her senior thesis on ISIS and Al-Qaida’s recruitment of westerners through social media. “I wanted to learn more about the Americans who were choosing to join the conflict,” she said.

After graduation, Genord plans to pursue a career in foreign policymaking or international affairs.

As she looks back on her time at Notre Dame, Genord said one of the things she values most is the sense of community within the Glynn program.

“In the Glynn community, you’re challenged by your classmates constantly, and it makes class discussions very interesting,” she said. “But, it’s also inspiring to talk with students outside class and hear all of the amazing things they’ve done.

“It’s a very supportive environment where everyone is enthusiastic and excited for each other and for the success they’ve had.”