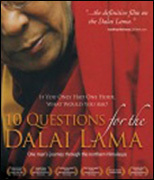 The Dalai Lama, Afghan political reformer Malalai Joya and British abolitionist William Wilberforce are among the stars of the ScreenPeace Film Festival, which will be presentedFeb. 1 to 3 (Friday to Sunday) in the Browning Cinema of the DeBartolo Center for the Performing Arts.

The festival will showcase five recent, critically acclaimed films that present compelling models of peace building in the face of extreme injustice or violent conflict. Notre Dame faculty members will be available for dialogue after most of the films.

All films are free, but require tickets. Call the DeBartolo Center ticket office at 574-631-2800 to order tickets, or pick them up at the door.

*"10 questions for the Dalai Lama" – Director Rick Ray asks the Dalai Lama some of the most provocative questions of our time. The film weaves together insights from Ray’s journeys through India and the Middle East with the wisdom of an extraordinary spiritual leader. Ray is expected to be present at the showing.

*"Jimmy Carter Man from Plains" – Academy Award-winning director Jonathan Demme created this surprising encounter with President Carter. He reveals a complex man driven by an intense sense of justice and a deeply spiritual vision of reconciliation and peace.

*"Enemies of Happiness" – Filmmakers Eva Mulvad and Anja Al-Erhayem follow the fearless and successful campaign of Malalai Joya, a 28-year old Afghan woman running in the country’s first democratic parliamentary elections in 35 years. Joya’s life was threatened numerous times because of her opposition to the warlords in the nation’s government.

*"Sir, No Sir" – This feature-length documentary by David Zeiger shows how U.S. troops opposed the Vietnam War by peaceful demonstration and subversion. It demonstrates that soldiers may oppose war as strongly as any civilian, and at great personal peril.

Originally published by Joan Fallon at newsinfo.nd.edu on January 14, 2008.