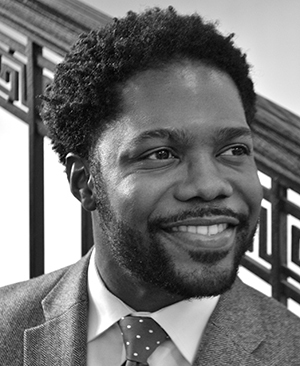 In studying what he has deemed the “global black South,” McInnis examines the looming sociopolitical and cultural presence of the plantation in the U.S. South and the Caribbean in the late 19th and early 20th centuries.

“A subtle and persuasive reader of texts, Jarvis McInnis brings literary works into conversation with the visual arts and music in revealing ways,” said Stephen M. Fallon, the Rev. John J. Cavanaugh, C.S.C., Professor of the Humanities and chair of the department. “From what we observed during his visit this winter, we expect him to be a dynamic and engaging teacher.”

Looking to the Future

McInnis will spend the next year at Princeton University in a postdoctoral position, where he will begin preparing his dissertation for publication. Titled Mapping the Global Black South: Aesthetics, Labor, and Diaspora, his research traces cultural linkages between people of African descent in the United States and the Caribbean.

In addition to his research interests, McInnis brings a passion for “scholar activism”—a desire to draw intellectuals together to tackle challenging societal issues.

While working toward his Ph.D. at Columbia University, he helped develop conferences and workshops on academic diversity, African diaspora literature and culture, and religion and African American literature. He was also the director of the W.E.B. DuBois Scholars Institute, a summer leadership and academic program for high-achieving middle and high school students from underrepresented backgrounds.

For McInnis, Notre Dame’s commitment to service and intellectual collaboration made it clear such efforts would be welcomed and encouraged.

“For me, scholar activism means using the space of the academy to try to imagine a better world,” he said. “That’s the goal of the humanities—to try to be better people, to encourage our students to be better people, and to use our ideas to strive for peace, for justice, for equality, especially for those at the margins of society. That’s really at the center of my identity as a scholar, a teacher, and a person in the world.”

Though his research is historical, McInnis said he’s frequently surprised at how personal it ends up becoming.

A native of Gulfport, Mississippi, he initially had no plans to research and write about his home region. He soon realized, though, how often the cultural significance of the black South is overlooked.

In recent decades, the study of African American literature and culture has focused on the impact of black migration away from the South, McInnis said, and the creative work done by artists and intellectuals who relocated to the urban centers of the North or traveled abroad to Europe.

But that results in a focus on a small, elite group, McInnis said. What about the people who stayed behind? What were their cultural experiences during the trying times of segregation?

“I became very interested in how they were conceiving of themselves as modern subjects in this oppressive space,” he said. “How did they create art? What literature did they create?”

Learning in the Present

McInnis’s personal experiences influence his research in other ways, too.

He’s studied how former plantations were transformed into institutions dedicated to improving the lives of African Americans—and earned his bachelor’s degree at Tougaloo College, a Mississippi liberal arts school located on a former plantation.

He’s researched the robust musical culture of the black South and its role in 20th-century African American literature—and sang African American spirituals as a member of the Tougaloo College Concert Choir.

His dissertation in part examines the importance of oratory in African American culture—and he grew up as an orator himself, from telling Bible stories in church at age 7 to motivational speaking for Boys & Girls Clubs across the country throughout college and graduate school.

Soon, that perspective will surface in his interactions with Notre Dame students.

“I’ve found that our lived experiences inform our research and teaching in important and often unexpected ways,” he said. “We draw on these experiences as we are creating new knowledge and asking new questions. So I’m looking forward to seeing how my students’ unique experiences will bring new and exciting insights to our exploration of African diaspora literature and culture.”