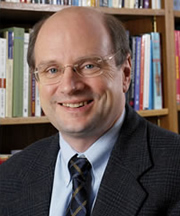 R. Scott Appleby, professor of history and John M. Regan Director of the University of Notre Dame’s Joan B. Kroc Institute for International Peace Studies, will give the commencement address and receive an honorary doctor of laws degree May 14 (Sunday) at Saint John’s University in Collegeville, Minn.

A member of the Notre Dame faculty since 1994, Appleby was graduated from the University in 1978 and holds master’s and doctoral degrees from the University of Chicago. Before returning to Notre Dame, he chaired the religious studies department of St. Xavier College in Chicago from 1985 to 1987, and he co-directed the Fundamentalism Project, an international public policy study, from 1988 to 1993.

In addition to serving as director of the Kroc Institute, Appleby teaches courses in American religious history and comparative religious movements. He is the author of “The Ambivalence of the Sacred: Religion, Violence and Reconciliation,” and “Church and Age Unite! The Modernist Impulse in American Catholicism” and co-author of “Transforming Parish Ministry: The Changing Roles of Clergy, Laity, and Women Religious.” He also is editor of “Spokesmen for the Despised: Fundamentalist Leaders of the Middle East” and co-editor of the five-volume “Fundamentalism Project” and of “Being Right: Conservative Catholics in America.”

Originally published by Michael O. Garvey at newsinfo.nd.edu on May 08, 2006.