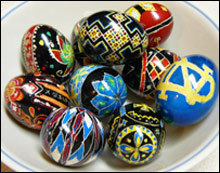 In observance of Eastern Orthodox Easter (April 27), Alyssa Gillespie, associate professor of Russian, invited her Beginning Russian II students to her home earlier this month to learn the ancient Slavic craft of making pisanki, or Easter eggs, which dates back to the 10th century and still is practiced in Ukraine, Poland and Russia.

Unlike the way many of us observe the resurrection of Christ, Gillespie (who, incidentally, is Jewish) didn’t dash to the dollar store for dye tablets and vinegar. She purchased the ancient tools of the trade ? copper funneled stylus or “kistka” and beeswax (from a Polish art supply store in Michigan) ? to write on the eggs before submerging them into a series of colored dyes to create intricate designs with meanings steeped in pagan Slavic folklore as well as, more recently, Christian symbolism. The term “pisanka” comes from the Slavic root “pisa-” meaning “to write.”

The students entertained their inner-children with the eggs and, at the same time, learned about the history and symbolism of the art form.

“I’m going to double major in German and Russian,” said freshman Tom Wiseman, “and after Notre Dame, I plan on applying for a Fulbright grant to either teach or do research abroad. I want to be fluent and be able to live in Russia some day, and I really don’t know much about Russian or Ukranian culture, so this was cool to learn something new.”

First, the students penciled their designs onto the eggs, then each used a stylus heated by candle flame and dipped into beeswax to draw molten wax onto whatever part of the design was to end up white. The eggs then went into the first dye bath for 20 minutes (typically yellow is first, followed by darker colors, with black last). The process is repeated, and each time the egg comes out of one color, another layer of design is added with wax. Whatever is covered with wax will remain that color. First the wax seals in white, then yellow, then green, and so on, and when it’s completed, the entire egg is black from a combination of black dye and charred wax.

“It’s really magical,” Gillespie said. “You melt off little sections of the wax and wipe the egg with a tissue, and suddenly, it’s like a revelation ? from black, this vibrant, beautiful design appears.”

The whole process takes four to six hours. After the eggs dry for about a day they are varnished for protection and dried for another day, then holes are drilled in the bottom of each and the insides are blown out with a special tool.

“Before Christianity came to the Slavic world, creating pisanki was a pagan custom with the egg itself symbolizing spring and rebirth,” Gillespie explained. "People would decorate them with pictures to attract good fortune, including rams and deer symbolizing wealth; water for rain; wavy lines connecting around the egg symbolizing eternity; spirals to catch evil spirits; triangles representing fire, air and water; swastikas symbolizing the sun; crosses representing the four corners of the world; and grapes for good harvest.

“After the arrival of Christianity, the symbolism was revised ? grapes and fish came to represent Jesus Christ and the Christian Word, the cross symbolized the crucifix, and the triangle stood for the Holy Trinity.”

The group was joined by Oksana Semenyuk, a 17-year-old exchange student from Ivano-Frankivsk, Ukraine, who attends Penn High School and who has a strong interest in folk art forms. Gillespie serves as Semenyuk’s local coordinator through the American Councils for International Education placement organization.

While listening to Russian, Polish and Ukrainian folk and sacred music, including Easter music, the students had the opportunity to talk to Semenyuk about the meanings and uses of pisanki in her native culture, although she laughingly admitted, “I made my first pisanki here in the United States.”

Gillespie, who also cooked a Russian feast for her students last fall, hopes the social connections and cultural encounters she’s fostering will inspire her students to continue learning the difficult language and motivate them to further pursue their interest in Russian and other Slavic cultures.