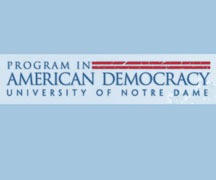 Established in 2001, Notre Dame’s Program in American Democracy (PAD) hosted its 39th guest speaker earlier this year. The scholars who have given lectures as part of the series—some prominent voices in the field, others promising young assistant professors—have tended to share the same thought with Christina Wolbrecht, associate professor of political science, before leaving campus.

These visitors aren’t alone in their enthusiasm.

This spring, Notre Dame received a $10 million gift from the Francis and Kathleen Rooney Foundation to turn PAD into the Rooney Center for the Study of American Democracy.

“This is huge,” says Wolbrecht, who served as PAD’s director for the last six years. “I think it’s fair to say you could use the word `transformative.’”

The endowment will support student-centered initiatives, as well. At the graduate level, where students regularly join faculty to workshop in-progress research, the Rooney Center will provide funds so the Department can offer more attractive stipends to the top doctoral candidates in American politics. Undergraduates interested in conducting research or participating in an internship program will be able to apply for grants designed to make such experiences easier to afford.

“There’s probably no better question for an undergraduate to ask at this or any other university than `What does it mean to say that America is a democracy?’” says David Campbell, John Cardinal O’Hara, C.S.C., Associate Professor of Political Science. Campbell, who will take over as director in January, notes that the Rooney Center is well-equipped to help students formulate their answers due to its focus on issues of leadership, citizenship and public service; the politics of democratic inclusion; constitutional studies; and the role of religion in a democratic society.

“We have a number of faculty who come at that basic question from a variety of angles,” he says. “So we hope that as undergraduates go through political science or specifically American politics at Notre Dame, they’re going to be exposed to a number of different ways to think about that question.”

Students and faculty alike will continue to have the opportunity to interact with scholars from across the country through events sponsored by the Rooney Center, such as conferences like “A Matter of Faith? Religion in the 2004 Presidential Election,” which was held at Notre Dame in 2005. In addition to organizing the conference, Campbell edited a book by the same name that consists of the papers that were presented. He says it’s the only book that gives the complete story of religion’s role in the election.

“There are some that come close, but what that book does is talk about the whole range of the way religion does and does not affect American politics. It’s hard for me to think of a topic that’s better suited to Notre Dame.”

The guest speaker series has been similarly successful. To date, it has featured John Aldrich (Duke University), Larry Bartels (Princeton University), Cathy Cohen (University of Chicago), Diana Mutz (Pennsylvania University) and the late Richard Neustadt (Harvard University), among many others.

With the new center serving, according to Campbell, “as the focal point for the study of American democracy at Notre Dame,” Wolbrecht thinks word about all that’s happening there is going to spread.

“That would be my goal for the Rooney Center,” she says, “that scholars would be able to say, `Oh yeah, I attended a Rooney Center conference a couple years ago; it was a great, productive event that brought together really interesting people,’ or, `I was invited out by the Rooney Center to give a talk and got great feedback,’ those sorts of things. It starts showing up on people’s C.V.’s. People recognize these centers as places that produce and distribute important knowledge.”

“This is a campus where there’s going to be a lot going on that’s going to feed your research, your teaching, your intellectual interests,” Wolbrecht says when asked what she would tell prospective faculty about Notre Dame.

“The University, because of this generous donation, has made a serious commitment to build in American politics,” he says. “At a time when many other universities are cutting back and facing restraints, Notre Dame is growing and moving forward. And so if they come here, they know that this is a place where they will find a thriving intellectual community with the resources necessary to make it happen.”

Originally published by Ted Fox at newsinfo.nd.edu on June 17, 2008.