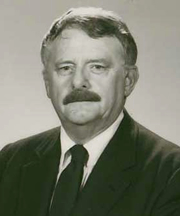 Born May 26, 1924, in Cambridge, Mass., Leader interrupted his studies at the Museum of Fine Art in Boston to serve in the Marines during World War II. As a 20-year-old corporal he was wounded during the invasion of Iwo Jima a few days after having been a member of the patrol that captured Mount Suribachi and famously planted an American flag there. Even in the heat of battle, his artistic and scholarly training were never far from him. He wrote years later that on the morning of the Suribachi assault he was startled at the infernal ugliness of a military objective which “only that morning I had thought looked beautiful, like the woodcut prints of Hiroshige and Utamaro.”

Leader returned from the war to obtain degrees in art from Yale University and the University of Illinois and to marry Dorothy Riehl of Raleigh, N.D. on Sept. 1, 1949. They had four sons and a daughter.

Leader taught for two years at Clarke College in Dubuque, Iowa, before coming to Notre Dame in 1953. Carrying a heavy teaching load, he quickly became one of the University’s most celebrated instructors. A memorable indication of his skills as a lecturer was the sustained standing ovation he once received from his students at the end of a crowded Washington Hall lecture on the unpromising subject of Gothic cathedral architecture.

One of his specialties, both as a scholar and a craftsman, was stained glass, and his many works in that medium include windows in Saint Matthew’s Cathedral in South Bend and in the chapel of Notre Dame’s Sorin Hall. He once said of the attempt to teach liturgical art craft, " It is hardly an academic task to teach young people to capturethe sound and sight of God in any media. It is like wrestling a thunderbolt in an attempt to nail it to the wall of a church. There are few who can survive such an arduous task."

Hickey Funeral Home is in charge of arrangements.

Originally published by Michael O. Garvey at newsinfo.nd.edu on April 12, 2006.