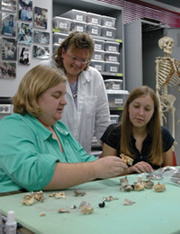 They say with food, presentation is everything. But can the same be said of bones? Really old bones?

It can if they’re the rare and valuable skeletal collections used for biocultural research at Notre Dame.

Housed in the Reyniers building on the northwest edge of campus, the bone collections used for anthropological research and analysis (including the 3,000-year-old remains of inhabitants of the world’s oldest walled city, and the remains of 5th-century Byzantine monks) have a new home and a new look: recently-installed, state-of-the-art drawers built into the walls of the lab.

“The new storage drawers allow us to lay out the bones in an organized fashion, so it’s easy to find what you’re looking for,” said Sue Sheridan, associate professor of anthropology who specializes in biological anthropology. “It will reduce the damage accumulated over years of stacking the bones in boxes and having to unpack them each time to find a specific specimen.”

Previously stored in labeled, plastic bins stacked on shelves, the bone collections were subject to repeated handling, unpacking and repacking — a pattern that could eventually take its toll on such fragile material.

“Now that we have so much more room, we can organize the bones by particular features,” Sheridan notes.

“Therefore, if a student is doing a project on, say, arthritis of the knee, they can pull out the drawers that contain distal femora and/or knee caps in them, and not disturb the bones that don’t fit their study.”

Though the bones are research specimens, they also are the remains of human beings and need to be studied and handled with the appropriate level of dignity, said Mark Schurr, chair of the anthropology department. The new storage facilities are a commitment to that as well.

Funded by the College of Arts and Letters, the storage space surpasses that found at major research institutions such as the Smithsonian, a clear demonstration of commitment to undergraduate education and research.

For the past six summers, undergraduates from across the country have come to Notre Dame to conduct original research on the bones, a course funded by a National Science Foundation grant. Integrating information from natural, historical and archeological records, students piece together biological clues from the bones to identify what certain populations ate, from what diseases they suffered, the kind of work they performed, and, in some cases, what violence befell them.

The improved storage units not only free up lab space for these students in Reyniers, but also make these collections far more accessible to them.

As Notre Dame’s Department of Anthropology continues to grow, additional archeologists will join the faculty, increasing the need for expanded lab space.

“The new storage facility will triple our current space and move non-collections, like files and books, out of storage, making it much more efficient,” Schurr said. “We have collections that were made with federal permits, and the new storage will bring us up to Department of Interior standards, protecting our ability to get research grants.”

Schurr explains that the improved storage space makes the valuable collections more secure by separating lab space — where access is paramount — and storage space, where security is extremely important.

When every bone portion from a total of four collections is finally moved into its new space, Sheridan estimates a total in the tens of thousands will have been relocated from makeshift house of astounding simplicity. “The plastic bins from Big Lots came in quite handy and served us well … but I really won’t miss them,” she quips.

Originally published by Susan Guibert at newsinfo.nd.edu on September 22, 2006.