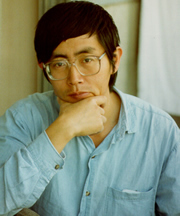 Exiled Chinese poet Bei Dao has given himself a tall order: Convince Notre Dame’s student poets that there is more to writing than wordplay. One must also have lived.

Bei Dao, whose real name is Zhao Zhenkai, uses the lives and works of a group of 20th century poets to make his case. They include Federico Garcia Lorca, who was executed during the early days of the Spanish Civil War; and the Russian Boris Pasternak, whose famous “Doctor Zhivago” had to be smuggled out of the country to be published. Bei Dao has befriended some more recently published poets, the Swedish poet Thomas Transtrmer and Gennady Aygi of Chuvash, an autonomous republic once part of the U.S.S.R.

“I try to tell stories about their lives, besides doing close readings of their poems,” says Bei Dao, a concurrent visiting professor of English and East Asian Languages and Literatures. “I want the students to get a sense of the balance between time and personal destiny, between writing and suffering, between the form and the experience. Poetry isn’t just a play on words. You have to gain certain life experiences.”

He adds: “Like all travelers, poets need a map to confirm their positions and to know how far they can go. My intention is to give my students this kind of map in an international sense.”

One hopes that Bei Dao is including his own poetry, and his own story, as he teaches his class on 20th century international poets. One need look no further than his life to see poetry inspired by circumstance.

In high school in Beijing, China, during Mao Zedong’s Cultural Revolution, Bei Dao and his classmates’ school was shut down. They were sent to remote areas of the countryside, where he worked in construction for 11 years. Dao laughs as he recalls his relief when the elite school first was closed: “I was bad in mathematics and physics. They were important. I was afraid I wouldn’t do well.”

For a time, Bei Dao had been sympathetic to Mao’s ideas, but “The Cultural Revolution was an earthquake for us. We were on the top, then we were thrown to the bottom. It was the first time we realized that the reality of China was far from the propaganda.”

“It wasn’t just my destiny. It was a whole generation. We were city boys and girls. Suddenly, we were peasants.”

Bei Dao never finished high school. But he never stopped thirsting for knowledge and literature. Literature was so difficult to come by that he and his friends snuck into libraries and homes in search of books. The best were called “yellow-covered,” which were translations of modern literature from outside of China. Forbidden to all but the most highly ranked, these translations eventually made their way into Dao’s literary circle.

“Under that political pressure, we were so eager to find our spiritual counterpart,” he recalls.

As he read, Bei Dao also began to write poetry that broke from the cultural norm of propaganda. As his work and that of his literary cohorts became published, they became known as the “Misty Poets.”

“We really tried to avoid this official discourse which dominated the Chinese society for many years. We tried to create a different language, a departure from ‘socialist-realism’ (the government-sanctioned literature).”

In 1978, with Dao as one of the founders, the literary journal Jintian (Today) was launched. The Misty Poets, and Dao, were considered the voice of the pro-democracy movement, with snatches of one of Dao’s poems appearing on posters during the Tiananmen Square protests and subsequent fatal military crackdown. During those crucial days, Bei Dao was at a conference in Germany. “I knew I was blacklisted. I knew I could not go back.” His wife and daughter remained in China.

A self-described nomad, Bei Dao lived in Europe for several years before immigrating to the United States in 1993. By his count, Notre Dame is the sixth or seventh American university where he has taught. He is currently married to a woman in publishing in China, and they have a year-old son. Since he can’t go back to China, he will reunite with them while he is teaching in Hong Kong this summer. His wife and son will have to leave China to be with him in the United States.

Although the Chinese government shut down Jintian in 1980, Dao was among exiled writers who revived it in 1990 as a forum for expatriate Chinese writers. They will have their first face-to-face editorial board meeting on campus March 20, when Notre Dame sponsors a 25th anniversary celebration of Jintian.

Few of Dao’s students have such a rich and painful background on which to draw. “But I encourage students to take a break. I tell them, ’Don’t just continue studying all the time. Gain life experience. Gain a view of the world. Go beyond this national boundary.’”

Originally published by Gail Hinchion Mancini at newsinfo.nd.edu on March 02, 2006.