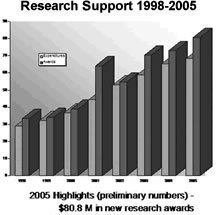 Included in the $80.8 million are some notable research awards:

“In the past five years, we have more than doubled incoming research dollars and have experienced steady growth in all areas,” said Mike Edwards, assistant vice president in the Office of Research.

Since 1999-2000, research dollars grew from $38.9 million to the current $80.8 total. Grants from the federal government represent nearly two-thirds of Notre Dame’s research support.

“This continued double-digit growth in external funding is a great compliment to our researchers, and the exciting and significant research taking place at Notre Dame, Edwards said. “It is especially noteworthy considering that the federal government’s funding available for research continues to remain relatively flat, if not decreasing slightly.”

These “technology transfer” activities involve faculty research which may have commercial applications. In 2001, University faculty submitted 12 intellectual property disclosures. That number rose to 41 in the last fiscal year. Six patents were issued to Notre Dame researchers this year, compared with three in fiscal year 2003-04.

Edwards noted that continued growth in research and in technology transfer by Notre Dame faculty contributes to the increased development of new products, technologies, and applications to improve our world.

Originally published by William G. Gilroy at newsinfo.nd.edu on August 22, 2005.