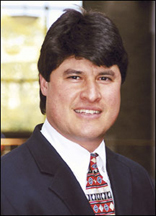 Religion plays a significant role in shaping Latinos’ political behavior and civic engagement, according to a report recently released by the Center for the Study of Latino Religion (CSLR) in the University of Notre Dame’s Institute for Latino Studies (ILS).

Titled “Faith and Values in Action: Religion, Politics and Social Attitudes Among U.S. Latinos/as,” the report analyzes the Pew Hispanic Center’s 2004 National Survey of Latinos. It finds that Latinos’ religious affiliation and church attendance influence their political party preference, degree of support for the war in Iraq and positions on the moral issues that shaped the 2004 presidential election.

The CSLR serves as a national center and clearinghouse for ecumenically focused social-scientific study of the U.S. Latino church, its leadership and the interaction between religion and community. Highlighting the ways in which religion strengthens and improves the quality of public life, the center examines the impact of religious beliefs, leaders, churches and faith-based organizations on Latino urban communities.