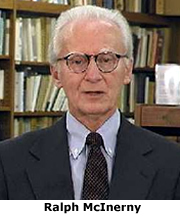 Ralph McInerny, professor of philosophy and Michael P. Grace Professor of Medieval Studies at the University of Notre Dame, will give the commencement address at Assumption College in Worcester, Mass., on Saturday (May 12). He also will receive an honorary degree during the ceremony.

McInerny, who holds degrees from the St. Paul Seminary, the University of Minnesota, and Laval University, has taught at Notre Dame since 1955. A past director of the Medieval Institute and of the Jacques Maritain Center, he is the author of numerous works of philosophical scholarship and popular fiction. His books include “The Question of Christian Ethics,” “Aquinas on Human Action,” “The Very Rich Hours of Jacques Maritain,” “Characters in Search of Their Author,” the Father Dowling mysteries, and “Irish Gilt,” the latest of a series of mysteries set on the Notre Dame campus.

Originally published by Michael O. Garvey at newsinfo.nd.edu on May 08, 2007.