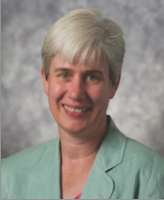 Rachel Rivers Parroquín joins the University of Notre Dame faculty this year as an assistant professional specialist who will both teach Spanish and lead an expansion of service learning programs for Spanish majors.

A former lecturer in languages and literatures at Valparaiso University, she developed a course to teach field-specific Spanish to students working in areas such as health care, education, social work, and psychology. Enhancing Spanish language learning through real-world applications is a large part of what her new colleagues are eager for Parroquín to bring to her joint appointment with the Department of Romance Languages and Literatures and the Center for Social Concerns.

“After sitting down with the department chair and my mentor at the Center for Social Concerns, I’ll be getting to know the Spanish faculty and also assessing their interests,” Parroquín says. “I’d like to find out who is interested and what might work in their specific classes.”

Ideas for new service-learning components in the Spanish courses could be as varied as the course offerings themselves, she says. Students might advocate for Spanish-speaking residents involved in legal or health care issues, stage plays with community members, hold sessions involving young adult literature, or make videos dealing with the cultural histories and experiences of first-generation immigrants.

“She’s a natural fit because there is a large Spanish-speaking population in the South Bend area,” says Connie Snyder Mick, assistant director of the center and director for Social Concerns Seminars and Community-Based Learning. “We’re excited about the joint appointment and its opportunities for collaboration.”

Marisel Moreno, assistant professor of Spanish, is now teaching the department’s first upper-division course incorporating service learning. Funded by a grant from the Center for Social Concerns, the course allows students to engage in two hours of service per week at South Bend’s Casa de Amistad.

Notes Tom Anderson, associate professor of Spanish and vice chair of the Romance Languages and Literatures Department, Parroquín brings a strong knowledge of demographics and social agencies in northwest Indiana that can be incorporated in to the curriculum. “Discussions of immigrant literature, for example, can concern the difficulties of immigrant life, language issues, and stereotypes,” Anderson says.

Parroquín received undergraduate degrees in both Spanish and education from Valparaiso, where she also completed her master’s in education. In 2008, she received an Ed.D from Loyola University Chicago. Parroquín has published work that addresses technology issues in language education, among other topics.

Current pedagogical best practices in language education are shifting teachers beyond a traditional focus on listening, speaking, writing and reading to the “Five C’s” of communication, cultures, connections, communities, and comparisons, Parroquín says.

“There is a greater integration of what the students are learning, so teaching and learning is becoming more interactive,” she says. “This will not just be conversation practice—we have to get something measurable, so students will be coming back, reflecting, and writing papers, too.”