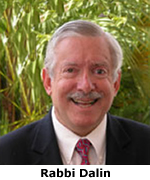 Rabbi David Dalin, professor of history and political science at Ave Maria University, will deliver a lecture on “John Paul II and the Jews” at 7:30 pm April 11 (Wednesday) in Room140 of DeBartolo Hall at the University of Notre Dame.

Rabbi Dalin, who holds master’s and doctoral degrees from Brandeis University and completed seminary studies at the Jewish Theological Seminary of America, is the author of several books, including, most recently, “American Jews and the Separationist Faith.” His book, “The Myth of Hitler’s Pope,” contests the arguments of some historians that Pope Pius XII inadequately opposed the Nazi persecution of European Jews.

Originally published by Michael O. Garvey at newsinfo.nd.edu on April 03, 2007.