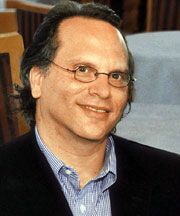 Buzz Bissinger, Pulitzer Prize-winning investigative journalist and author of the best-selling novel “Friday Night Lights,” will be among the distinguished presenters at the 39th annual Notre Dame Literary Festival, taking place at the University from Feb. 13 to 16 (Monday to Thursday).

Bissinger will wrap up the festival on Feb. 16 with a writing workshop at 4p.m. in the Foster Room of the LaFortune Student Center and a lecture that evening at 7 in Washington Hall.

The recipient of a Pulitzer Prize for a series of reports for the Philadelphia Inquirer on that city’s court system, Bissinger also has written for such publications as Vanity Fair, the New York Times Magazine and Sports Illustrated. Published in 1990, “Friday Night Lights” was released in 2004 as a major motion picture.

A complete schedule of events is available at http://www.nd.edu/~alcwp/06NDLF.htm on the Web.

Originally published by Julie Flory at newsinfo.nd.edu on February 03, 2006.