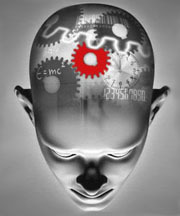 No matter what the subject, “youngest” and “best” aren’t two adjectives that regularly associate with each other, as how long something has been around tends to place an upward bound on how highly we’re willing to value it.

But that hasn’t stopped the Quantitative Program in Notre Dame’s Department of Psychology from giving the old “Rome wasn’t built in a day” mentality a run for its money.

Consider that when Scott Maxwell, Matthew A. Fitzsimons Professor of Psychology, came to Notre Dame in 1982 as an associate professor, he was the department’s lone quantitative faculty member and would be for some years to come. It wasn’t until fall 1999 that the program was formally organized, which, according to Maxwell, makes it one of the youngest in the country.

In its short existence, however, it has seen three of its faculty recognized with the Society of Multivariate Experimental Psychology’s prestigious Cattell Award for early career accomplishment, including 2007 winner Gitta Lubke; since 1990, no other university has had more than two recipients of this honor.

“If you look at the list of names who have won that award previously, it’s a great recognition that my name would be included,” says Lubke, an associate professor. Notre Dame has had a total of four winners—Maxwell, Steve Boker, Ke-Hai Yuan and Lubke, although Boker accepted a position at the University of Virginia last year. Even so, the department is home to more recipients of the award than any other psychology department in the United States.

“It says the obvious, I think, that we are one of the leading programs in the country with respect to the faculty we have,” Lubke notes about the distinction. That cohort also includes Anre Venter and Guangjian Zhang, and with the addition of three assistant professors this fall, the department now has one of the largest quantitative groups amongst its peers.

“I think the year has come that the Quantitative Program at Notre Dame is going to be very much on the map in the U.S.,” Lubke says.

Because of the increasing level of methodological sophistication required in all branches of psychological research, quantitative expertise is at a premium. The new faculty have specific interests within their diverse research agendas that make them particularly good fits for the department.

Hiring Alison Cheng, for instance, addresses the area in which the program has had the most difficulty adding a specialist: item response theory, which is more or less the math behind the measurement of psychological traits. Cheng, who completed her doctorate at the University of Illinois, primarily uses the theory to examine latent traits, focusing on aptitude and proficiency in an educational context.

Lijuan Wang received her doctorate from the University of Virginia. Her work in longitudinal data analysis will contribute both to what has become a defining aspect of quantitative psychology at Notre Dame and to the department’s strong Developmental Program.

Like Wang, Johnny Zhang earned his doctorate from Virginia and will play a central role in the department’s efforts in longitudinal research. He’s also part of a small contingent of psychologists using cutting-edge Bayesian methods, a computer-intensive alternative to classical statistics that allows researchers to integrate new findings with what they already know.

It was no small feat attracting these three scholars in one recruiting season. Maxwell says a recent American Psychological Association task force reported there were twice as many faculty openings in quantitative psychology as there were new doctorate recipients. This, he believes, makes it even more important to maintain an environment that engages all faculty but especially those just starting out in their careers.

“The whole department is a very collegial group of people,” Maxwell says, “and from the day I arrived, I think everybody supported everybody. It’s always been a place that has appreciated what junior faculty have to offer and has high standards but also provides support that helps people to meet those standards.”

That the quantitative faculty and their counterparts in the more applied areas do indeed get along is a point Lubke feels is worth emphasizing. Historically, the field of psychology has been characterized by tension between the two. At Notre Dame, she’s found that the Quantitative Program truly is “embedded” in the department.

She has similar praise for the University in general. Quantitative psychologists often must branch out beyond their own departments to gain access to the data they need, and she describes Notre Dame as “very flexible” when it comes to allowing faculty to take research leave and collaborate with scholars elsewhere.

“I can see the benefits for my career,” Lubke says. “They are tremendous.”

In addition to the current faculty, Maxwell credits Boker and Cindy Bergeman, chair of the department and a professor in the Developmental Program, for helping set the Quantitative Program on such a firm foundation. As it continues to grow, he’d like to see the program become more involved in undergraduate education and other quantitative initiatives, ideally enhancing opportunities for interdisciplinary teaching and research in statistics.

Given how much progress has been made since he first set foot on campus, those seem to be relatively modest goals.

“Now, I think we really have developed a reputation around the country of training [graduate] students in our own program and in the other programs in the department in a way that makes them distinctive on the job market,” Maxwell says. “Several of our students in other programs are now teaching graduate-level quantitative courses at places where they’ve taken academic positions. And the idea that that could’ve happened in 1982 was just unthinkable.”

Originally published by Ted Fox at newsinfo.nd.edu on July 08, 2008.