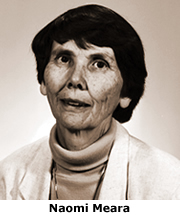 Naomi Meara, the Nancy R. Dreux Professor of Psychology emerita at the University of Notre Dame, died Wednesday (Feb. 28) at St. Joseph Medical Center in South Bend after a brief illness. She was 70.

A native of Columbus, Ohio, Meara studied English and education at Ohio State University, and earned her master’s degree in student personnel administration from Syracuse University and doctorate in psychology from Ohio State. Before joining the Notre Dame faculty in 1986 she had taught at the University of Wisconsin, LaCrosse; Ohio Dominican College; and the University of Tennessee.

In addition to teaching undergraduate and graduate courses at Notre Dame, Meara chaired the psychology department from 1988 to 1991 and served on numerous University committees. She also was the author of dozens of articles on psychoanalytic counseling and the achievement and career development of women and co-author with M.J. Patton of the textbook “Psychoanalytic Counseling.”

Meara’s teaching, research and publications particularly concerned the application of virtue ethics to the education of psychologists. A soft-spoken woman admired by her students and colleagues for her keen intellect and sense of humor, she insisted that the virtues of prudence, integrity, respectfulness and benevolence were indispensable to the practice of her profession.

According to John Borkowski, Andrew J. McKenna Professor of Psychology at Notre Dame, Meara exemplified those virtues as well. In a tribute published in the May 2001 issue of The Counseling Psychologist, Borkowski wrote that “among Naomi’s many contributions to counseling psychology, the one that stands out in my mind is hersensitive, selfless and purposeful style of leadership… If only we had more leaders like Naomi in the profession, in academia and in government, we would all be better off. Can Naomi’s leadership style be packaged and distributed to organizations in need?”

Visitation will be from 2 to 6p.m.Sunday (March 4) at Welsheimer Funeral Home, 17033 Cleveland Road, South Bend, and a funeral Mass will be celebrated Monday (March 5) at 9:30 a.m. in Notre Dame’s Basilica of the Sacred Heart.

Originally published by Michael O. Garvey at newsinfo.nd.edu on March 02, 2007.