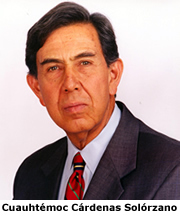 Cuauhtmoc Crdenas Solrzano, a founding member of Mexico’s Party of the Democratic Revolution (Partido de la Revolucin Democrtica – PRD) and former head of government for the country’s Federal District, will deliver a lecture titled “A Progressive Agenda for Mexico” at 6p.m. Tuesday (April 10) in the Hesburgh Center auditorium at the University of Notre Dame.

In his talk, Crdenas will analyze the challenges to Mexico’s left and its legislative agenda, consider Mexico’s role in Latin America, and provide perspective on U.S.-Mexico bilateral relations.

A prominent Mexican politician, Crdenas is a senior member of the PRD and is considered the “moral leader” of the party. In addition to serving as head of government of the Federal District (a position similar to mayor of Mexico City) from 1997 to 1999, Cardenas was senator of the state of Michoacn (1976 to 1980) and governor of the same state (1980 to 1986).

Crdenas split with the party in 1987. The following year he headed a coalition comprised of socialists and former communists and made a bid for the presidency.

He narrowly lost to Carlos Salinas de Gortari in an election that was widely believed to be fraudulent.

In 1989, Crdenas and other leading center-left and leftist politicians formally founded the PRD, and he served as its president from 1990 to 1993, and as the party’s candidate in the 1994 and 2000 presidential elections.

Originally published by Kelly Roberts at newsinfo.nd.edu on April 04, 2007.