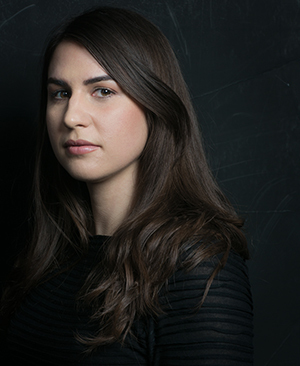 In March, Van der Vliet Oloomi was named a 2015 Whiting Award winner for “early accomplishment and the promise of great work to come.” Other past winners of the Whiting Award, established in 1985, include Jeffrey Eugenides, Ben Marcus, Mona Simpson, and Suzan-Lori Parks.

“Azareen has won a major literary prize,” said Stephen Fallon, English department chair and John J. Cavanaugh Professor of the Humanities. “She is one of 10 writers, and one of only three fiction writers, to win this highly significant, extremely competitive award this year.

“It is excellent news not only for Azareen but for the creative writing program, the English department, the College of Arts and Letters, and the University.”

Van Der Vliet Oloomi also recently received a fellowship from The MacDowell Colony, where she will be a writer-in-residence during the month of August.

Her 2012 debut novel, Fra Keeler, earned critical acclaim for its “chilling,” “surreal,” and “humorously associative meditation” about a man who investigates the death of the former owner of his newly purchased house. The book has been translated into Italian, available from Giulio Perrone Editore in Rome this May.

She is currently working on Taüt, which she describes as “a bizarre love story and the journey of a lifetime through the Western Mediterranean … a darkly comic novel that explores the relationship between literature, space, and mortality from the point of view of a narrator who suffers from intense bouts of literature sickness.”

In addition, she is writing a collection of short stories—one of which was recently published in The Brooklyn Rail.

This semester, Van der Vliet Oloomi is teaching a course called Walking, Writing, Thinking to an “exceptionally engaged and talented group of students.”

She also developed a rigorous graduate level literature seminar for M.F.A. students called Introspection and Voyage: Examining Narrative Across Time. Students read texts that range from the medieval to the contemporary, explore “the genealogy of radical literature,” and engage with literary traditions from around the world.

Van der Vliet Oloomi said she has built close intellectual ties within her own department and with faculty members in the Department of Romance Languages and Literatures and the Program of Liberal Studies. “We often exchange ideas and work, and those interactions have been critical for me.”

She said she considers herself “very lucky to be surrounded by brilliant scholars, thinkers, and writers at Notre Dame.

“I like to think about literature as an infinite archive, and it’s been great to have the company of the faculty as I float around in it looking for sources. They have been a tremendous source of inspiration and support.”