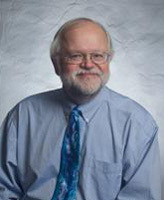 Rev. Maxwell Johnson, professor of liturgical studies in Notre Dame’s Department of Theology, was recently elected vice president of the North American Academy of Liturgy (NAAL) for 2013 and will become its president the following year.

Founded at Notre Dame in 1975, NAAL is a national ecumenical and inter-religious association of liturgical scholars that seeks to promote liturgical scholarship among members and “extend these benefits to the worshiping communities to which its members belong.”

“I was actually rather surprised by the election,” Johnson says. “I had agreed to allow my name to go forward but I assumed others would be stronger contenders than I was. I am truly honored by the academy that they would elect me to this position.”

As part of his election, Johnson will hold the position of vice president for one year, assume the presidency in 2014, and then spend two years on NAAL’s Academy Committee.

During his tenure, Johnson says, he hopes to continue NAAL’s vibrant tradition of scholarship and intellectual exchange.

“The strength of the North American Academy of Liturgy is its numerous seminars, which meet several times over the course of the national meeting each year. The seminar topics range from Early Jewish and Christian Liturgy all the way to more contemporary concerns and issues,” he says.

During the NAAL’s recent Problems in the Early History of Liturgy seminar, Johnson was presented with a “festschrift,” a German word that academics use to describe a collection of writings honoring a scholar on a memorable occasion. The festschrift, A Living Tradition: On the Intersection of Liturgical History and Pastoral Practice; Essays in Honor of Maxwell E. Johnson, featured contributions from his former Ph.D. students as well as several of his colleagues.

At Notre Dame, Johnson studies the origins and development of early Christian liturgy and current ecumenical theological questions and has co-authored or edited more than 19 books. His next book, Praying and Beliving in Early Christianity: The Interplay between Worship and Doctrine, will be released in fall 2014 by The Liturgical Press.

Johnson is a “Double Domer”—he received both a master’s degree and a Ph.D. from Notre Dame’s Department of Theology.