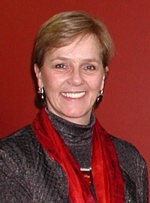 Catherine Perry, associate professor of Romance languages and literatures at the University of Notre Dame, has been appointed a Chevalier (“knight”) in the Ordre des Palmes Academiques by the French Ministry of National Education.

Created in 1808 by Napoleon I, the Palmes Academiques originally was designed to honor outstanding members of the faculty of the University of Paris. Membership later was expanded to include people beyond the French university system, including other nationals and French scholars living outside the country whose work promotes French language, culture and educational activities.

Perry, who specializes in French literature of the 19th and early 20th centuries, also serves as undergraduate advisor for the Program in French and Francophone Studies at Notre Dame. She is a faculty fellow in the Nanovic Institute for European Studies and in the Kroc Institute for International Peace Studies.

Yannick Mercoyrol, cultural attach of the French Consulate in Chicago, will decorate Perry with the insignia of the Ordre des Palmes Academiques at a ceremony at Notre Dame in March.

Originally published by Susan Guibert at newsinfo.nd.edu on January 25, 2006.