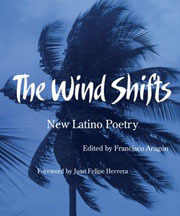 “The Wind Shifts: New Latino Poetry,” edited by Francisco Aragn, director of Letras Latinas, the literary program of the University of Notre Dame’s Institute for Latino Studies, earned first place in the Poetry in English category at the 2008 International Latino Book Awards.

Hosted annually since 1999 by Latino Literacy Now, the program honors the many positive contributions being made to Latino literature by publishers and writers across the United States, as well as Mexico, South and Central America and Spain. The competition highlights titles that exemplify literary excellence within the Latino community and, this year, honored titles on subjects including the murders of innocent women in Jurez and the history of the Day of the Dead celebration.

“The Wind Shifts,” an anthology published last year by University of Arizona Press, gathers for the first time works by emerging Latino poets in the 21st century and features poems about traveling and living overseas, as well as works rooted in the natural world, embedded in suburbia, nourished by life on the U.S.-Mexico border and electrified by life in the big city.

“My hope is this will bring more attention to the fine poets in the anthology and new Latino poetry in general,” Aragn said. “An International Latino Book Award is especially gratifying because it’s recognition from within our community.”

The book also is being included among “The Best of the Best from the University Presses: Books You Should Know About” at the American Library Association’s annual conference this month and will be featured in the 18th edition of “University Press Books Selected for Public and Secondary School Libraries.”

Earlier this year, Aragn was awarded a grant from the San Antonio-based National Association of Latino Art and Culture to organize “The Wind Shifts: New Latino Poetry ON TOUR.” Featuring 25 poets, the national tour has visited the Society of the Four Arts in Palm Beach, Fla., and the Loft Literary Center in Minneapolis, and will visit four other cities in the next two years.

Letras Latinas seeks to enhance the visibility, appreciation and study of Latino literature, both on and off the Notre Dame campus, with a focus on projects that identify and support emerging Latino writers.