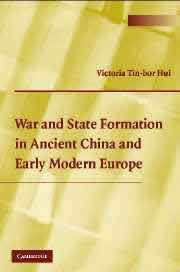 Challenging the Eurocentric conventional wisdom which holds that the West is unique in having a multi-state system in international relations and liberal democracy in state-society relations, Hui’s book explores the ancient period when China was a system of sovereign territorial states similar to Europe in the early modern period. This systematic comparison blends Eurocentric and Sinocentic perspectives, examining why China and Europe shared similar processes but experienced opposite outcomes.

“Victoria Hui is perhaps the only person in the international relations field capable of writing such a sophisticated comparative history of the Chinese and European state systems,” says Alastair Iain Johnston, a professor of Chinese at Harvard University. “The result is a provocative argument about the importance of strategic amorality, ruthlessness, and resource mobilization in state building, and about why ancient Chinese states outperformed European states in these areas.”

A member of the Notre Dame faculty since 2004, Hui’s areas of specialty include the dynamics of international politics and the origins of constitutional democracy. She earned her master’s and doctoral degrees from Columbia University.

Ohio State Mershon Center for International Security Studies fosters the understanding of national security in a global context. Its Furniss Book Award is given annually to an author whose first book makes an exceptional contribution to the study of national and international security and influences the understanding of the use of force and diplomacy; ideas, identities and processes that affect security; and institutions that manage violent conflict.

Originally published by Susan Guibert at newsinfo.nd.edu on August 23, 2006.