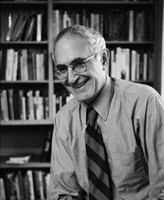 According to the prize committee, the honor recognizes Zuckert’s scholarship as well as “his extraordinary ability as a classroom teacher who has provided generations of undergraduates and graduate students a profound understanding of our constitutional heritage.”

Zuckert has been at the University of Notre Dame since 1998 and directs the Tocqueville Program for Inquiry Into Religion and American Public Life in the College of Arts and Letters. He is also the founding editor of the new journal American Political Thought: A Journal of Ideas, Institutions, and Culture (University of Chicago Press), which will publish its first issue in spring 2012.

In announcing the lifetime achievement award, JMC’s president, Rear Admiral Mike Ratliff, emphasized that the distinction does not mean Zuckert’s greatest accomplishments are behind him.

“Professor Zuckert is at the top of his game, and his future is very exciting,” he says. “He continues to build Notre Dame’s program in constitutional studies into one of the most important in the nation.”

Adds Michael Gillespie, Jerry G. and Patricia Crawford Hubbard Professor of Political Science at Duke University, “It is hard to imagine someone better suited to editing this journal or someone whose reputation would add more luster to its masthead. In his hands, I am convinced that American Political Thought will in short order become the preeminent journal in the field.”

Gillespie, who presented an appreciation of Zuckert’s work at JMC’s Eighth National Summit on Higher Education, says “the comprehensiveness of Michael’s intellect is equally obvious in the enormous variety and depth of his scholarship, which ranges across almost all of the areas and periods of political philosophy, American political thought, and constitutional law, with a few excursi through various works of literature.

“Michael’s work is not just good scholarship, it is good citizenship,” he adds.

Zuckert says that, to some degree, his scholarly career is a legacy of his own early education. It was a particularly compelling high school class, he recalls, that first sparked his interest in American history and politics.

“I then studied constitutional law and political theory as an undergraduate and worked on early modern political philosophy, the philosophy that influenced the American founders,” he says. “I found this theory and the philosophical claims it raised to be of great interest and importance. In graduate school, I studied with some outstanding teachers of these subjects, and that confirmed my interest in the area.”

At Notre Dame, Zuckert seeks to nurture and inspire that same curiosity in his students. One of his main goals, he says, is to help them learn to read and appreciate, in a critical way, the challenging and sophisticated texts he assigns in his classes.

“I always hope to engage students enough that they will see the urgent importance of grappling with these texts and the issues the texts deal with,” he says.

In addition to his work with undergraduate and graduate students, Zuckert has served as lead scholar for several public radio and public television series and published extensively, including Natural Rights and the New Republicanism, The Natural Rights Republic, Launching Liberalism: On Lockean Political Philosophy, and (with Catherine Zuckert) The Truth About Leo Strauss: Political Philosophy and American Democracy.

He is currently working on a new book, he says, on the origins of the constitutional theory that inspired the making of the United States Constitution.

Michael Desch, professor and chair of Notre Dame’s Department of Political Science, says he can think of no one as deserving of this award as Zuckert.

“He is a stellar scholar—a leading figure nationally in both political theory and American constitutional thought—and he has mentored generations of students who have gone on to jobs throughout the academy,” he says.

“However, Michael’s contributions to our department and the discipline go well beyond the normal ambit of scholars to institution building and otherwise laying the foundation for his intellectual vision to thrive here at Notre Dame for generations to come.

“Michael’s example is both inspiring and daunting to those of us who aspire to have a fraction of his impact.”