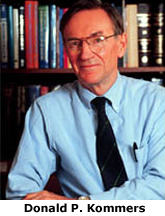 Donald P. Kommers, Joseph and Elizabeth Robbie Professor of Political Science and concurrent professor of law at the University of Notre Dame, will deliver the commencement address and receive an honorary doctor of laws degree at St. Norbert College in De Pere, Wis., on May 13 (Sunday).

A member of the Notre Dame faculty since 1963, Kommers teaches courses on American and comparative constitutional law and has written numerous books, articles and reviews on these subjects as well as on German politics. From 1980 to 1982, he served as an advisor to the Commission on the Holocaust. He is a past recipient of an Alexander von Humboldt fellowship and currently serves on the board of directors of the Humboldt Association of America.

Kommers, who has been a resident scholar in Germany’s Federal Constitutional Court, also received an honorary doctor of laws degree from Heidelberg University in 1998.

Originally published by Michael O. Garvey at newsinfo.nd.edu on May 03, 2007.