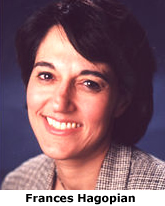 Frances Hagopian, the Michael P. Grace II Associate Professor of Political Science at the University of Notre Dame, has been awarded a 2007-08 fellowship from the Woodrow Wilson International Center for Scholars.

Hagopian will spend the academic year working on her current research project, titled “Reorganizing Political Representation in Latin America: Parties, Program and Patronage in Argentina, Brazil, Chile and Mexico,” in residence at the Wilson Center in Washington, DC.

Her research and teaching focus on the comparative politics of Latin America, with emphasis on democratization and the political economy of economic reform in Brazil and the Southern Cone. She is author of the book “Traditional Politics and Regime Change in Brazil” and co-editor of “The Third Wave of Democratization in Latin America.”

Established by an act of Congress in 1968, the Wilson Center is the nation’s official living memorial to the only American president with a doctoral degree, Woodrow Wilson. A non-partisan institute for advanced study and dialogue, the center brings pre-eminent thinkers to Washington to interact with policymakers and public officials.

Originally published by Kyle Chamberlin at newsinfo.nd.edu on April 09, 2007.