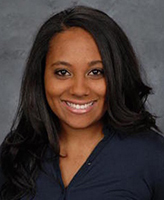 As a judicial intern at the Supreme Court of the United States last summer, Notre Dame senior Veronica Guerrero got a behind-the-scenes look at one of the nation’s most influential institutions.

Guerrero, a political science and Chinese major in Notre Dame’s College of Arts and Letters, worked in the Office of the Counselor to the Chief Justice, where she helped with tasks such as giving lectures within the courtroom, welcoming prestigious international visitors to the court, and creating a daily news summary for the court.

“It tells everyone what’s happening in U.S. and international courts, which was really cool. I loved that part of my job.”

Seeing the court in action was another highlight of her summer internship, she said.

“I was able to sit in on all of the non-argument sessions—the decision sessions or whenever the court meets and attorneys are not presenting arguments,” Guerrero said. “I got to be there when a lot of the case decisions were coming out.

“It’s a very deliberate, thoughtful place. It was really exciting to be there and see it from a different perspective than we might in a classroom or especially on the news.” 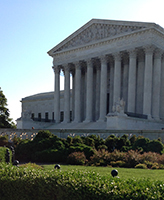 Guerrero, who is particularly interested in American politics and the Constitution, said the internship offered a better understanding of the nation’s top court.

She is currently writing her senior thesis on Justice Clarence Thomas and the core tenets of his affirmative action jurisprudence. Her research, she said, aims to go beyond his stated position on the issue to examine the legal, historical, and personal influences that led him to that conclusion, as well as the ways in which he interprets documents such as the Declaration of Independence and the U.S. Constitution.

Guerrero said that she also appreciated exploring Washington, D.C. and learning more about career options there.

“D.C. is an amazing place to live. I really like the city and there’s so much to do,” she said. “At my internship, they were good at exposing us to different places in D.C., so we were able to take different field trips and see places we might want to work.”

To help defray the expenses of living in D.C., Guerrero received a grant from the Arts and Letters Summer Internship Program. Over the last five years, the program has funded more than 200 Arts and Letters students in a wide variety of internships across the country and around the globe.

She was also awarded a Downes Grant from the Mary and Greg Downes Endowment for Excellence in Government, which provides funding to political science students committed to public service.

“I couldn’t have done it without the funding,” Guerrero said. “D.C. is a really expensive city, and I just wouldn’t have been able to pay for it all.”

“It was incredible to have that experience—to be around some of the best lawyers in the country and be engaged in the legal system in that way.”