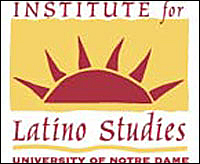 A policy brief recently released by the Institute for Latino Studies (ILS) at the University of Notre Dame describes the potential effects of proposed legislation aimed at controlling unauthorized immigration.

The report, titled “SB 345/HB 1219: Economic and Demographic Impacts on Indiana,” highlights the possible unintended consequences that the bill could have on the short- and long-term economic cycles of production and consumption and on the demographics of Indiana. The ILS contends many of the potential effects are the result of common, but incorrect beliefs about the characteristics, costs and economic effects of immigration.

If the law were to be successful in its stated aim of expelling undocumented immigrants from the state, it will directly and immediately affect some 153,000 people (immigrants and their families), 2.6 percent of Indiana’s population, according to Allert Brown-Gort, associate director of the ILS and co-author of the report.

“Immigrants are here mostly because they have responded to a demand for workers, and taking away this supply will have consequences,” Brown-Gort said. “Also, even if the law is not successful in sending unauthorized immigrants away, it would drive them further underground, increasing both the levels of the informal economy and the probability of exploitation by unscrupulous employers.”

Other potential economic effects detailed in the report include the following:

* A sudden increase of up to 44,000 vacant dwellings on the market — 2 percent of the housing stock

* The loss of 87,000 workers or 2.2 percent of the overall labor force, concentrated disproportionately in the food, manufacturing and construction sectors

* A $2.3 billion decrease in personal income in the state

* A $200 million shortfall in state taxes

“Our success as a society depends on the successful integration of the growing Latino community,” Brown-Gort said. "Success, then, demands that we understand where, why and how the population is growing, in order to put in place innovative policy responses for the benefit of all Hoosiers and all Americans.

“We hope this policy brief will provide a factual base from which proposed legislation can be discussed, and that if the legislators proceed with the bill, they will do so fully understanding the costs involved.”

The immigration bill currently is in the House. The General Assembly ends its session Friday (March 14).

Founded in 1999, the ILS is committed to providing policymakers, community leaders and the general public with accurate, current information to facilitate decision making across all levels of government and community. In addition, the ILS promotes understanding and appreciation of the social, cultural and religious life of U.S. Latinos by advancing research, expanding knowledge and strengthening community.