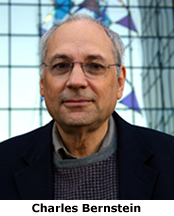 Charles Bernstein, a renowned figure in innovative American poetics, will deliver a lecture series titled “The Attack of the Difficult Poems: Poetics, Technology, Invention” from Nov. 27 to 29 (Monday to Wednesday) in the auditorium of the University of Notre Dame’s Hesburgh Center for International Studies. The events are free and open to the public.

The first lecture, “The Task of Poetics, the Fate of Innovation and the Aesthetics of Criticism,” will be presented Nov. 27 at 5p.m. Bernstein will speak on “The Poetics of Invention and the Art of Teaching” at 5p.m. Nov. 28, to be followed by a reading of his poetry. On Nov. 29 at 1:30p.m., a public discussion of Bernstein’s presentations thus far will be led by Notre Dame professors, local scholars and poets, followed by Bernstein’s final presentation, “Objectivist Blues & the Art of Immemorability” at 5p.m.

Bernstein is the Donald T. Regan Professor of English at the University of Pennsylvania and has been instrumental in producing the most useful and widely known Web-based tools for teaching. A 1972 graduate of Harvard, he is the author of 25 books of poetry, most recently “Girly Man,” the editor of numerous books of essays, and writer of five librettos. His essays have appeared in more than 150 periodicals and his three collections are among the most influential books of prose on the topic of postmodern poetry. Bernstein has received multiple fellowships and has been a writer-in-residence or visiting faculty member at numerous universities.

Bernstein’s lectures are sponsored by the Department of English as a part of the 2006 Ward-Phillips Lectures.

Originally published by Arlette Saenz at newsinfo.nd.edu on November 21, 2006.