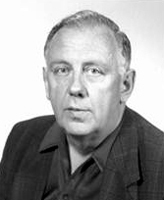 MacIntyre, the Rev. John A. O’Brien Senior Research Professor of Philosophy (emeritus), received the association’s biennial Benjamin E. Lippincott Award, which recognizes “a work of exceptional quality by a living political theorist” that is still considered significant at least 15 years after its original publication. 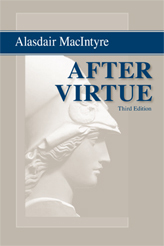 When After Virtue first appeared in 1981, Newsweek called it “a stunning new study of ethics by one of the foremost moral philosophers in the English-speaking world.” In 2007, it was also featured in One Hundred Great Catholic Books: From the Early Centuries to the Present by Don Brophy.

“Alasdair MacIntyre has done more than any other person in the last quarter century to energize debate about the dilemmas of ethical decision making in daily living,” Brophy writes.

A fellow of the American Philosophical Society and American Academy of Arts and Sciences, MacIntyre has made significant contributions to the history of philosophy, moral philosophy, political theory, philosophy of the social sciences, and philosophy of religion.

He is a prolific writer whose books include A Short History of Ethics, Whose Justice? Which Rationality?, Three Rival Versions of Moral Enquiry, and Dependent Rational Animals. He most recently published God, Philosophy, Universities: A Selective History of the Catholic Philosophical Tradition.