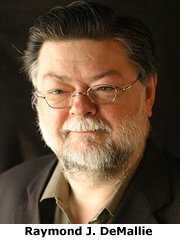 Raymond J. DeMallie, professor of anthropology at Indiana University, will discuss American Indian timekeeping in a lecture at 7:30p.m. April 3 (Tuesday) in the auditorium of the Hesburgh Center at the University of Notre Dame.

Titled “Lakota Winter Counts and the Cultural Interpretation of Time,” DeMallie’s lecture is sponsored by the Phi Beta Kappa Visiting Scholar Program and co-hosted by the Notre Dame chapter of Phi Beta Kappa (Epsilon of Indiana) and the Department of Anthropology. The lecture and an ensuing reception are free and open to the public.

The Lakota people kept pictorial records that designated each passing winter and served as calendars to name the years. DeMallie’s talk will introduce winter counts as a genre, discuss the nature of the events they commemorate, and offer some interpretation of what they reveal about native Lakota concepts of time and history.

DeMallie is director of the American Indian Studies Research Institute at Indiana University, where he has been a member of the faculty since 1973. He earned a doctoral degree in anthropology from the University of Chicago and is past president of the American Society for Ethnohistory.

With research focusing on the social organization, belief systems, oral traditions and material culture of the Plains Indians of North America, DeMallie has edited several publications, including “North American Indian Anthropology: Essays on Society and Culture” and “Sioux Indian Religion: Tradition and Innovation.” He has done fieldwork on reservations in the Dakotas, Montana and Saskatchewan.

Originally published by Kyle Chamberlin at newsinfo.nd.edu on March 26, 2007.