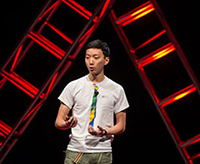 Senior Peter Woo, a Hesburgh-Yusko Scholar and a philosophy and finance major with a minor in Chinese at the University of Notre Dame, has been named the recipient of the Indiana Campus Compact (ICC) 2014 Richard J. Wood Student Community Commitment Award. The annual award recognizes the efforts of students from an Indiana college or university for the impact they have in their communities and on the citizens of the state.

This marks the third year in a row that a University of Notre Dame student has received the Wood Award. The 2013 winner was senior Jon Schommer, a Program of Liberal Studies and civil engineering major in the Reilly Arts and Letters/Engineering Dual-Degree Program. Erin Wright ’13, a theology and Arts and Letters preprofessional studies major with a minor in poverty studies, won the 2012 award.

Woo grew up with missionary parents in Thailand and was able to see firsthand how much service means to both the recipient and the people who serve. When he came to Notre Dame, Woo grew steadily along a continuum of service from curious college student to founder of the microlending institution Jubilee Initiative for Financial Inclusion (JIFFI).

The summer after his freshman year, he traveled to India as part of an International Summer Service Learning Program through the Center for Social Concerns (CSC), where he worked in a nonprofit community agency, tasked with researching money-lending practices. When he came back to campus that fall, he researched predatory lending in the United States, and specifically South Bend. In final preparation for launching JIFFI, Woo spent the summer of 2012 at a microfinance organization through a Social Venturing Internship from the CSC and Gigot Center for Entrepreneurship to gain additional microlending experience.

Woo said, “I had to act, especially as a business student, and follow my philosophy of service.” He gathered a team of 12 students and together they laid the groundwork for the student-run microlending organization as an alternative to predatory lending in South Bend. JIFFI now has eight active borrowers after opening the doors last February. The staff of 12 has grown to 30, JIFFI has formed partnerships to expand its client base and the operation has an office downtown South Bend.

In recommending Woo for the award, Bonnie Bazata, executive director of Bridges Out of Poverty, said, “Peter approached us and asked to understand how poverty works in our community and what he could do about it. He wanted to connect this effort to his growing expertise in business and finances, and he found his niche when he learned about the trap of payday lenders who can charge up to 390 percent on loans to low-income people who lack access to fair credit and face financial crises regularly. With an estimated 7,000 payday loan borrowers in St. Joseph County, JIFFI is anticipating to save the county roughly $3.5 million annually by bringing everyone out of the trap of payday loans. Now that is a lasting contribution that few students are able to make to the community where they learn and grow for four of the most important years of their lives.”

His focus is now on sustaining the business. Woo said, “When I founded JIFFI, I wanted to build an organization that would offer my peers, now and in the future, an opportunity to engage with South Bend on a deeper level than ever before. My intent for JIFFI does not end with providing tools for financial independence; I also wanted to share my philosophy of service by shaping JIFFI as a nexus at which students’ interests, passions and vocations intersect in concrete action to address real problems in the community. I am encouraged because my understanding of service as relating to others with what we have as a fellow human being is really just an attitude, a way to be human.”

Woo was recognized at a luncheon and awards program as part of the Indiana Campus Compact Service Engagement Summit on Thursday (March 27) in Indianapolis. He is one of four Service Engagement Award winners who were honored for their work at the summit. Along with the public recognition, the award winners receive a cash gift to donate to the community partner of their choice in order to further its service to the community.

Read Woo’s essay, “With What We Have,” that was part of the nomination process for the award.

Originally published by John Guimond at news.nd.edu on March 28, 2014.