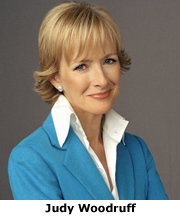 Noted broadcast news correspondent and anchor Judy Woodruff will deliver the 2007 Red Smith Lecture in Journalism at 7:30p.m. April 12 (Thursday) in the Carey Auditorium of the Hesburgh Library at the University of Notre Dame.

Woodruff, senior correspondent on “The NewsHour with Jim Lehrer” on PBS, will examine the changing role of reporters in a talk titled “Are Journalists Obsolete?” The event is free and open to the public.

Earlier this year, Woodruff returned to “The NewsHour,” where she reports from across the United States, conducts studio interviews and serves as substitute anchor. From 1993 until 2005 she anchored the daily program “Inside Politics” on CNN. Prior to joining CNN, Woodruff was White House correspondent for NBC News and served as chief Washington correspondent for “The MacNeil/Lehrer NewsHour” on PBS.

Woodruff has served as a visiting fellow at Duke University, of which she is a graduate, and Harvard University. Her interest in the political views of young people resulted in the recent PBS documentary “Generation Next: Speak Up. Be Heard.” She is currently working on a second “Generation Next” documentary, which will be broadcast later this year.

Woodruff is the recipient of many journalism honors, including the 2002 Edward R. Murrow Award for continuing coverage of the Sept. 11 terrorist attacks and the 1997 News and Documentary Emmy Award for outstanding instant coverage of the Centennial Olympic Park bombing in Atlanta. In 1995 she won the CableACE award for Best Newscaster and in 1994 she was named the inaugural recipient of the National Women’s Hall of Fame President’s 21st Century Award.

The Red Smith Lecture in Journalism was established in 1983 to honor the sportswriter and 1927 Notre Dame graduate Walter W. “Red” Smith, who won the Pulitzer Prize for distinguished criticism in 1976. At the time of his death in 1982, Smith was a columnist for The New York Times.

The series is made possible by a gift from John and Susan McMeel and Universal Press Syndicate. A South Bend native and 1957 Notre Dame graduate, John McMeel is chairman of Andrews McMeel Universal, the parent company of Universal Press Syndicate. He is a member of the advisory council for Notre Dame’s College of Arts and Letters and a member of the advisory committee of the Gallivan Program.

Universal Press Syndicate, which is based in Kansas City, will publish Woodruff’s lecture and distribute it to several thousand journalists and educators.