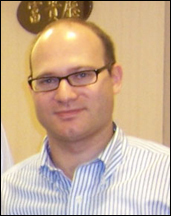 Jonathan Noble is newly appointed to the Office of the Provost. But his duty roster is more reminiscent of the traditions of diplomacy. He is, in short, “Our Man in Asia.”

Noble, who has taught Chinese language as a member of the Department of East Asian Languages and Cultures, is catching up in his Main Building office after spending several summer weeks in Beijing, Shanghai, Hong Kong, and Taipei, meeting with alumni and Asian and U.S. higher education representatives and various government leaders.

His overarching mission, as advisor of Asia initiatives, is to explore the question: What is Notre Dame’s role in Asia?

It’s a question with several parts. First, who among our faculty is involved in research in Asia?

“I find out on a daily basis about faculty involvement in research and education in China,” Noble said.

He will compile and disseminate a comprehensive list in preparation for asking the more complex question: What institutional infrastructure – in addition to the Center for Asian Studies – should be in place to support Asian studies on campus and programs in Asia?

Another question: Does Notre Dame’s distinctive character and traditional scholarly pursuits offer some something useful to Asia – particularly China – as the region grows into its role as a global influence? The faculty has deep experience in issues of international social justice, business ethics, law, and corporate and social responsibilities. Noble is exploring which areas can represent the seeds of partnerships that can engage educators and policymakers alike.

Noble already senses opportunities for such signature programs. Not clear yet is whether they build on longtime Chinese affiliations -the business ethics work of Georges Enderle, the O’Neill professor of International Business Ethics, for example. Also possible is that the East Asian languages and cultures faculty parlay their expertise in media and cultural studies into a unique partnership with an Asian university.

The University places some undergraduates and dozens of Mendoza College of Business graduates in Asia each year, and increasing and refining student opportunities is also on Noble’s to-do list. Notre Dame does not yet operate its own undergraduate studies program in China, collaborating instead, with the Council on International Education Exchange (CIEE) through a program at East China Normal University in Shanghai and Peking University in Beijing.

A pilot intensive-language experience placed three Chinese language students in studies at Fu Jen University, a Catholic university in Taipei, Taiwan, over the summer. This small step may someday stand as the first in what becomes a permanent student exchange program. It was supported with a generous donation by a Notre Dame alumnus.

That support signals another of the opportunities that Noble will tap: the tremendous enthusiasm of alumni in Asia. As individuals and as affiliates of alumni clubs, they are proud of their affiliation and eager to help.

As he sifts these opportunities for the outline of the infrastructure, Noble’s duties touch on the day-to-day. He wants to launch a language-and-culture for-credit program in Beijing just before the 2008 Olympics. In the meantime, he has helped facilitate a partnership between NBC sports and the Career Center. The network will visit campus in mid-October to interview for interns for the Summer Olympics broadcast.

Originally published by Gail Hinchion Mancini at newsinfo.nd.edu on September 13, 2007.